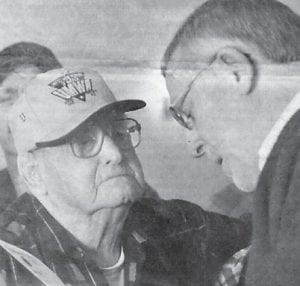 Howard Austin of Sturgis, who lived in Letcher County for many years, recently celebrated his 93rd birthday and 75 years as a member of the United Mine Workers of America (UMW).

According to The Sturgis News, he was the guest of honor at a meeting of the local UMW chapter, where he was presented with a plaque from UMW President Cecil Roberts and International Secretary-Treasurer Daniel J. Kane. The plaque reads, “With enormous and heartfelt respect the officers and members of the United Mine Workers of America recognize our 93- yearyoung friend and brother Howard Austin for his 75 years of membership and fraternal fellowship with the UMWA and its members.” A letter from Roberts which commends Austin was also read at the meeting.

Austin worked for a number of years at Peabody Camp 2. He is the brother of Giles Austin of Haymond, and was married to the late Mae Hall Austin for 72 years before her death Oct. 26.