Australian actor hit it off with Swayze on ‘The Beast’ 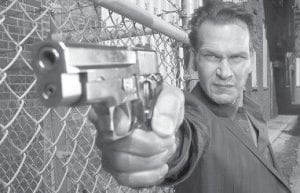 Patrick Swayze is shown in a promotional photo for the A&E series, “The Beast,” premiering January 15. (AP Photo)

Travis Fimmel might not be a household name, but he’s been known to stop traffic.

The Australian actor, who stars with Patrick Swayze in A&E’s upcoming FBI drama “The Beast,” is better known for his Calvin Klein undies than his spotty acting career. About seven years ago, Klein signed Fimmel to an exclusive deal to be the brand’s underwear model — the dream job of impossibly gorgeous poster boys.

Fimmel’s body starred in global ads: A London billboard of his sixpack abs — and scandalous bulge — had to be removed because it caused so much congestion by ogling onlookers. And the Calvin campaign lived on YouTube videos dedicated to Fimmel’s physique.

But don’t ask Fimmel about any of that. It’s a touchy subject.

“It’s not my ideal job and I’ll never do it again,” says the 29- year-old, smoking like a chimney in his New York hotel room, and refusing further questions about his modeling past: “I’m here to promote the show.”

Fimmel, who has traded his surfer-guy mane for a shorter ‘do, is referring to “The Beast,” which premieres on A&E Jan. 15, 10 p.m.

The FBI drama features Fimmel as a young agent (Ellis Dove) recruited to investigate his partner Charles Barker, played by Swayze. It is Fimmel’s most highprofile TV role since appearing in the short-lived 2003 version of “Tarzan.” And after several years of go-nowhere acting gigs, he’s out to prove that he’s more than just a pretty face.

“He has a kind of shyness the way a lot of really good-looking, really intense, young, ambitious actors do — and also no real desire to walk down the street and be recognized,” says John Romano, an executive producer of “The Beast.”

“That’s not what he’s seeking. What he wants and what he deserves is to really be understood as a talented actor and deep actor. His room is filled with Marlon Brando tapes and he studies the people he thinks are sort of in line with his own vision of what he can do.”

Indeed, a clip of Fimmel on Sharon Osbourne’s former talk show is painful to watch. The actor, then promoting “Tarzan,” can hardly speak he is so uncomfortable; Osbourne overcompensates, chatting up a storm.

So it came as no surprise during a recent interview when Fimmel clammed up at the sight of a tape recorder. He looked decidedly un-Hollywood in a hooded sweatshirt and jeans, as if ready to get this thing over with so he could get a drink at the bar.

Fimmel grew up the youngest of three brothers on a dairy farm 10 hours west of Sydney, Australia. Discovered by a modeling scout at 19, he later moved to Los Angeles to try his luck in show business, using his square jaw, sharp blue eyes and athletic build to full advantage. After landing that reportedly six-figure Calvin Klein contract, he snagged his would-be breakout role as Tarzan, which was canceled after eight episodes.

Fimmel picked up some odd TV and film work and spent time at his family farm. In September 2007, he was cast as rookie FBI agent Ellis Dove in “The Beast”; he filmed the pilot two months later and the rest of the first season this past summer through the end of November.

All the focus of the Chicagobased show has been on Swayze’s yearlong battle with pancreatic cancer. Swayze checked himself into a hospital on Friday for observation after contracting pneumonia.” You couldn’t get a nicer guy,” Fimmel says. “He’s great in the show, he’s fantastic. … He shows up every day. … You wouldn’t know there’s anything wrong with him at all.”

He stalwartly defends the 56- year-old actor against media reports saying that Swayze doesn’t have long to live.

“He just did a show for five months, worked every day, did a tremendous job and so it’s disappointing that people would write that,” Fimmel says.

The two actors hit it off, sparking strong chemistry on and the off screen. Fimmel describes the “Dirty Dancing” star as a “bit of a cowboy” and a comedian “who’s got some lame jokes” he can’t repeat due to their R-rated content.

“He taught me a lot about elegance, talking to creative people on set — because everybody’s got their idea of stuff and it’s a collaboration, so it’s always gonna be conflicted. And he helped me deal with that a lot,” says Fimmel, admitting to an “Australian temper.”

In “The Beast,” Fimmel’s character must accept the unsettling task of training under and investigating Swayze’s Charles Barker, a man he admires and fears for his shrewd, gutsy — and amoral — tactics, which may or may not be in the agency’s best interests. The pilot episode shows Barker persuading a family man to commit suicide, launching a missile into a city street and sending Dove on a dangerous mission that requires him to smoke crack during a game of Russian roulette.

Even so, Dove is mesmerized by Barker. The young agent tries to bring out his mentor’s hidden humanity, Fimmel says.

“We have nobody else in our lives really that we have a connection with. Ellis tried to connect with other people, but there’s something about Barker — Barker was the same as Ellis when he was younger,” he says.

Ramono says life imitates art in the Swayze-Fimmel dynamic. Fimmel, Romano, observes, “really wants to go to school. … He’s already acting out the role in life in Ellis … which is to both learn from him and dig out his own turf in relation to him.”

Fimmel acknowledges that he struggled to memorize his lines and lose his Aussie accent during the nonstop filming schedule. He worked with a dialect coach to learn flat American speech, practicing in his trailer every morning.

“Hopefully, the performance is consistent,” he says.