Authors will sign books at arts and crafts show 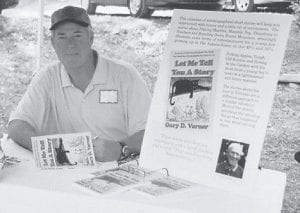 BOOK SIGNING SET – Author Gary Varner is pictured at a recent book signing. He will be autographing his book Let Me Tell You a Story at the Little Shepherd Arts and Crafts Show in Jenkins May 18-20.

Gary Varner of Johnson City, Tenn., has written an interesting book entitled Let Me Tell You a Story about his life and career. Many of his stories have a humorous twist that keeps the reader turning pages and sharing the stories with friends.

Gary was born in the Choppin’ Branch area of McRoberts in 1938 and lived there until 1945. He attended school at the Upper Building on Bandmill Hill. At that time the town was so densely populated that there were three schools. The other two schools were the Lower Building at the end of Cannel City Row and the Colored School in Tom Biggs.

His dad was Luther “Pop” Varner, who worked in Consolidation Coal Company Mine No. 214 at the mouth of No. 15 Hollow. His mom, Drucilla, worked at the company store meat market as a butcher. Gary recalls seeing his mom carry a half of a beef on her shoulder from the cooler to the butcher table. She was a very strong, healthy woman and worked as a butcher until she was 72 years old.

The family moved from McRoberts in 1945 when his dad took a job in Cincinnati, Ohio. But coal dust was in his veins and two years later the family moved back to the mountains and took up residence in Pound, Va. His dad started working in the coal mines when he was 16 years old and continued until he was 65 except for the two years the family lived in Cincinnati. Luther Varner had migrated from Kermit, W.Va., and his wife, Drucilla, had migrated from Pound.

Gary grew up in Pound and graduated from Pound High School in 1957. He credits growing up in a small town as the inspiration for his stories. He was a dreamer and wanted to “try everything and see the world.” After graduating from East Tennessee State College, Gary was drafted into the U.S. Army and attended Officer Candidate School to become an officer. During his seven-year tenure he attended Flight Training School to become an Army aviator. He spent one year in Vietnam as a reconnaissance and combat support pilot in the Go Cong Province.

Many of Gary’s stories are drawn from his life adventures. As a civilian, Gary spent 28 years in health care before retiring in 1999. He came out of retirement after a few years to serve as the executive director of the Johnson City Area United Way for two years while a search was being conducted for a permanent director. He retired again in 2004.

Gary lives in Johnson City with his wife, Peggy, who was his high school sweetheart. They have two children and four grandchildren. Other than writing, Gary enjoys golf, traveling, and storytelling.

We’re looking forward to having Gary at the Little Shepherd Arts and Crafts Show in Jenkins May 18-20. We will have an open microphone and Gary promises to get on the stage and share some of his stories with us.

Gary and his friend, Darrell Fleming, will share a spot at the event. The two met at a previous festival book signing and became instant friends. Darrell grew up in Clintwood, Dickenson County, Va. He graduated from Union College in Barbourville with majors in English, history, and political science. He also attended the University of Virginia at Charlottesville, where he earned a master’s degree in secondary school administration.

After serving in the U.S. Army in Germany, he began teaching in Fairfax, Va., where he taught high school English for nine years and served as assistant principal and principal at the secondary level for 16 years. He completed his career as coordinator of human resources for Fairfax County Schools before retiring in 1998. Darrell will be selling his book, Family, Friends and War Heroes, published in 2005. He lives in Blountville, Tenn., with his wife, Kathy.