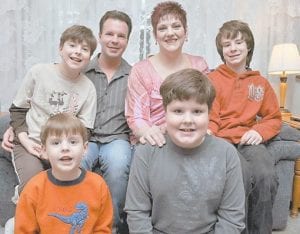 Keith and Kelli Gibson of Battle Creek, Mich., pose for a photo in their home with their sons, front left, Kolten, 6, and Caiden, 7 and in the back, Keifer, 9, left, and Connor, 11. All four boys have diff erent forms of autism. (AP Photo)

In the autism world, people with Asperger’s syndrome are sometimes seen as the elites, the ones who are socially awkward, yet academically gifted and who embrace their quirkiness.

Now, many so-called “Aspies” are upset over a proposal they see as an attack on their identity. Under proposed changes to the most widely used diagnostic manual of mental illness, Asperger’s syndrome would no longer be a separate diagnosis.

Instead, Asperger’s and other forms of autism would be lumped together in a single “autism spectrum disorders” category. Some parents say they’d welcome the change, thinking it would eliminate confusion over autism’s variations and perhaps lead to better educational services for affected kids.

But opponents — mostly older teens and adults with Asperger’s — disagree.

Liane Holliday Willey, a Michigan author and selfdescribed Aspie whose daughter also has Asperger’s, fears Asperger’s kids will be stigmatized by the autism label — or will go undiagnosed and get no services at all.

Grouping Aspies with people “who have language delays, need more self-care and have lower IQs, how in the world are we going to rise to what we can do?” Willey said.

Rebecca Rubinstein, 23, a graduate student from Massapequa, New York, says she “vehemently” opposes the proposal and will think of herself as someone with Asperger’s no matter what.

Autism and Asperger’s “mean such different things,” she said.

Both are classified as neurodevelopmental disorders. Autism has long been considered a disorder that can range from mild to severe. Asperger’s symptoms can vary, but the condition is generally thought of as a mild form and since 1994 has had a separate category in psychiatrists’ diagnostic manual. Both autism and Asperger’s involve poor social skills, repetitive behavior or interests, and problems communicating. But unlike classic autism, Asperger’s does not typically involve delays in mental development or speech.

The American Psychiatric Association’s proposed revisions are posted online at www.DSM5.org for public comment, which will influence whether they are adopted. Publication of the updated manual is planned for May 2013.