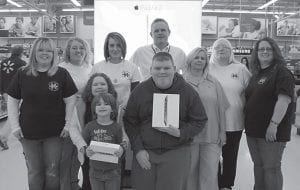 The smiles on these children’s faces show their pleasure in the iPads given to them by the Autism Awareness Advocates. The organization raised money for the iPads by selling spaghetti dinners, auctioning items, and through donations.

Letcher County’s Autism Awareness Advocates recently raised money for iPads for children with autism in the community. Two hundred and nine spaghetti dinners were sold and over 115 items were auctioned off with the help of 103.9 The Bulldog WXKQ radio station. The group also was given cash donations that helped raise enough money to purchase 20 iPads.