Autism not really an ‘epidemic’ 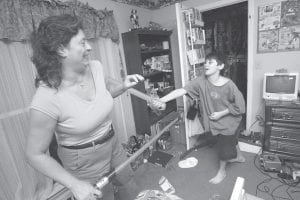 BROTHERS HAVE ASPERGERS SYNDROME – Julia Massey and son Ryan Massey, 11, right, shared in a fun moment recently while playing in his room at their home in Dacula, Ga. Ryan is the youngest of three brothers in his family, all of whom have aspergers syndrome, which is a milder variant of autistic disorder. (AP Photo/John Amis)

A few decades ago, people probably would have said kids like Ryan Massey and Eddie Scheuplein were just odd. Or difficult.

Both boys are bright. But Ryan, 11, is hyper and prone to angry outbursts, sometimes trying to strangle another kid in his class who annoys him. Eddie, 7, has a strange habit of sticking his shirt in his mouth and sucking on it.

Both were diagnosed with a form of autism. And it’s partly because of children like them that autism appears to be skyrocketing: In the latest estimate, as many as one in 150 children have some form of this disorder. Groups advocating more research money call autism “the fastest-growing developmental disability in the United States.”

Indeed, doctors are concerned there are even more cases out there, unrecognized: The American Academy of Pediatrics last week stressed the importance of screening every kid – twice – for autism by age 2.

But many experts believe these unsociable behaviors were just about as common 30 or 40 years ago. The recent explosion of cases appears to be mostly caused by a surge in special education services for autistic children, and by a corresponding shift in what doctors call autism.

Autism has always been diagnosed by making judgments about a child’s behavior; there are no blood or biologic tests. For decades, the diagnosis was given only to kids with severe language and social impairments and unusual, repetitious behaviors.

Many children with severe autism hit themselves or others, don’t speak and don’t make eye contact.

Blake Dees, a 19-year-old from Suwanee, Ga., falls into that group. For the past eight years, he has been in a day program with intense services, but he still doesn’t talk, he’s not toilettrained, and he has a history of trying to eat anything – even broken glass.

But he’s not a typical case.

In the 1990s, the autism umbrella expanded, and autism is now shorthand for a group of milder, related conditions, known as “autism spectrum disorders.”

The spectrum includes Asperger’s syndrome and something called PDD-NOS (for Pervasive Developmental Disorder- Not Otherwise Specified). Some support groups report more than half of their families fall into these categories, but there is no commonly accepted scientific breakdown.

Gradually, there have been changes in parents’ own perception of autism, the autism services schools provide, and the care that insurers pay for, experts say.

Eddie, of Buford, Ga., was initially diagnosed with obsessive compulsive disorder, attention deficit hyperactivity disorder and other conditions. But the services he got in school were not very helpful.

His mother, Michelle, said a diagnosis of autism brought occupational therapy and other, better services.

“I do have to admit I almost like the idea of having the autistic label, at least over the other labels, because there’s more help out there for you,” said Scheuplein.

“The truth is there’s a powerful incentive for physicians and schools to classify children in a way that gets services,” said Dr. Edwin Trevathan of the U.S. Centers for Disease Control and Prevention.

Many with Asperger’s and PDD-NOS succeed in school and do not – at first glance – have much in common with children like Blake Dees.

At a recent gathering of families with Asperger’s children in the Atlanta area, parents told almost comical stories about kids who frequently pick their noses, douse food in ketchup or wear the same shirt day after day.

Such a frank, humorous exchange was once a rarity. Doctors for many years believed in the “refrigerator mom” theory, which held that autism was the result of being raised by a cold, unloving mother. The theory became discredited, but was difficult to dislodge from the popular conscience.

Even in the early 1980s, some parents were more comfortable with a diagnosis of mental retardation than autism, said Trevathan, director of the CDC’s National Center on Birth Defects and Developmental Disabilities.

Today, parents are more likely to cringe at a diagnosis of mental retardation, which is sometimes equated to a feeblemindedness and may obscure a child’s potential.

And increasingly, professionals frown at the term: The special education journal Mental Retardation this year changed its name to Intellectual & Developmental Disabilities.

The editor said that “mentally retarded” is becoming passé and demeaning, much like the terms idiot, imbecile and moron – once used by doctors to describe varying degrees of mental retardation.

In contrast, autism has become culturally acceptable – and a ticket to a larger range of school services and accommodations.

In 1990, Congress added the word “autism” as a separate disability category to a federal law that guarantees special education services, and Education Department regulations have included a separate definition of autism since 1992.

Before that, children with autism were counted under other disabling conditions, such as mental retardation, said Jim Bradshaw, an education department spokesman.

The Social Security Administration also broadened its definition of disability to include spectrum disorders, like Asperger’s.

Something else changed: The development of new stimulants and other medicines may have encouraged doctors to make diagnoses with the idea of treating them with these drugs.

Perception of the size of the problem changed, too.

Fourteen years ago, only 1 in 10,000 children were diagnosed with it. Prevalence estimates gradually rose to the current government estimate of one in 150.

That increase has been mirrored in school districts. Gwinnett County Public Schools – Georgia’s largest school system – had eight classrooms for teaching autistic youngsters 13 years ago; today there are 180.

Some researchers suggest that as autism spectrum diagnoses have gone up, diagnoses of mild mental retardation have fallen.

CDC scientists believe education numbers are misleading, because they reflect only how kids are categorized for services. They say there’s no clear evidence doctors are substituting one diagnosis for the other.

Some parents believe environmental factors – ranging from a preservative in vaccines to contaminants in food or water – may be important contributors. (The last doses of early childhood vaccines containing the preservative thimerosal expired in 2002, although some children’s flu shots still contain it.)

Dr. Gary Goldstein, scientific adviser to the national advocacy group Autism Speaks, said the explanation for the rising autism prevalence is probably complex. Labeling and diagnosing probably play a role, as do genetics, but he believes the increase surpasses those two explanations.

“I’m seeing more children with autism than I ever would have expected to see,” said Goldstein, who is chief executive of the Kennedy Krieger Institute, a treatment center for pediatric developmental disabilities in Baltimore.

Autism Speaks budgets more than $4 million each year to research the causes of autism, and about 90 percent of that has gone to genetics research. But organization officials recently have been talking about changing that mix, and spending as much as 50 percent of that money on potential environmental triggers, Goldstein said.

Whether it’s because of genes or the environment (or both), autism has hit the Massey family hard. Chuck and Julia Massey, of Dacula, Ga., have three sons with Asperger’s.

The youngest, Ryan, was first diagnosed after he was slow to develop speaking ability. His brothers – Trevor, 14, and Morgan, 16 – had learning and behavior problems and were later diagnosed with Asperger’s, too.

All got special education services and were treated with medications. Morgan has improved, or matured, or both, and is now a social kid in mainstream classes at a Gwinnett County high school. Trevor seems to be making the same transition, his mother said.

Ryan is the most extreme. He still has uncontrollable tantrums and must attend an Asperger’sonly sixth-grade classroom that teaches social skills along with traditional subjects.

In a recent interview at the family’s home, Ryan acknowledged he still has anger control issues. One of the three other students in his class is particularly irritating. Ryan said the way he reacts is by “grabbing his throat.”

But on this night, Ryan was calm. He described himself as happy, and paced the room telling jokes, like a nervous standup comedian. (“Why didn’t the skeleton go to the party? He didn’t have the guts,” he said, eyes fixed on his audience.)

Having three Asperger’s boys under one roof has at times been very intense, Massey said, noting a replaced dining room window.

Ryan acknowledged it’s been educational living in a house full of Asperger’s kids. Asked to name something he’s learned from his brothers, he replied, “Swears.”