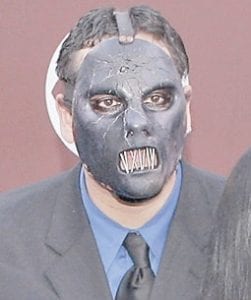 Paul Gray was found dead in a suburban Des Moines hotel room on May 25. A hotel worker told a 911 dispatcher that a hypodermic needle was found near Gray’s body and that pills also were found in the room.

The autopsy shows he died of an overdose, Urbandale, Iowa police said in a news release. They also said the autospy revealed signs of significant heart disease.

Gray was a co-founder of the Des Moines-based band known for its groteque masks, thrashing sounds and aggressive, dark lyrics.

Slipknot emerged in the mid- 1990s and it’s 1999 debut album sold about 2 million copies. The ban won a Grammy in 2006 for best metal performance for the song “Before I Forget.” (AP)