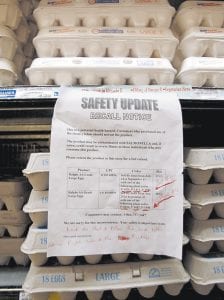 A sign warns customers of the recall of certain lots of eggs that had been previously sold at a supermarket in Los Angeles. A salmonella outbreak that sickened hundreds and led to the recall of hundreds of millions of eggs from one Iowa firm will likely grow, federal health officials said. (AP Photo)

Farms like the two involved in a massive recall of more than a half-billion eggs are rarely inspected by the federal government, officials say, as the Food and Drug Administration has traditionally reacted to outbreaks instead of working to prevent them.

Food and Drug Administration chief Margaret Hamburg said this week her agency hasn’t had enough authority to help prevent outbreaks like the more than 1,000 cases of salmonella poisoning linked to the eggs from two Iowa farms.

Giving a series of network interviews, Hamburg said the FDA is taking the issue “very, very seriously.” At the same time, she said Congress should pass legislation stalled in the Senate that would increase the frequency of inspections and give the agency authority to order a recall. Companies now have to issue such recalls voluntarily.

“We need better abilities and authorities to put in place these preventive controls and hold companies accountable,” Hamburg said.

Food safety advocates have pushed for such improvements for more than a decade, as there have been few rules on the books that require companies to make eggs, along with many other foods, safer. The FDA’s authority on the farm is questionable as the agency is often limited to gathering information about a contamination outbreak after people have already been sickened. Investigations into what went wrong come well after the crucial evidence is gone.

Dr. Jeff Farrar, FDA’s associate commissioner for food protection, says the agency has traditionally focused on food manufacturing facilities instead of farms as the agency’s authority is muddled and there are few standards in place.

“The farm is just a diff erent environment,” he said. “Without those standards we don’t have the specific information to say you are in compliance in this area and out of compliance here.”

The Obama administration has tried to remedy that with new rules that went into effect in July, just after the current egg outbreak began. The rules, which require producers to do more testing for salmonella and take other precautions, had languished for more than a decade after President Bill Clinton first proposed that egg standards be toughened. The FDA said in July that the new safeguards could reduce the number of salmonella cases by nearly 60 percent.

Those rules would be bolstered by the legislation, which the House passed more than a year ago but the Senate has not yet taken up. The bill would provide more money to the FDA for inspections and enforcement.

The lack of oversight has become a bigger problem as the egg industry, like many other food industries, has consolidated over recent years, placing fewer, larger businesses in control of much of the nation’s egg supply to consumers.

“These are high risk facilities so you need FDA checking on them regularly, at least once a year, to make sure they are complying with the regulations,” said Caroline Smith DeWaal, food safety director for the Center for Science in the Public Interest. “You can’t produce food at that level without a food safety cop on the beat.”

The two Iowa farms linked to the disease outbreak — Wright County Egg and Hillandale Farms — share suppliers of chickens and feed as well as ties to an Iowa business with a long history of violating state and federal laws. FDA officials said last week they had “no inspectional history” with Wright County Egg.

Jewanna Porter, a spokeswoman for the egg industry, said the company Quality Egg supplies young chickens and feed to both Wright County Egg and Hillandale Farms. The two share other suppliers, she said, but she did not name them.

Lawsuits are building up against the companies. William D. Marler, a Seattle attorney for a person who filed suit alleging illness from tainted eggs in a salad at a restaurant in Kenosha, Wis., said his firm has been retained by two dozen families and was representing a woman who was hospitalized in California.

As for consumers, Hamburg had some practical advice: Reject over-easy eggs. She said that as federal investigators continue their work with the companies involved, consumers should strictly avoid “runny egg yolks for mopping up with toast.”

The number of illnesses, which can be life-threatening, especially to those with weakened immune systems, is expected to increase. The most common symptoms are diarrhea, abdominal cramps and fever eight to 72 hours of eating a contaminated product.