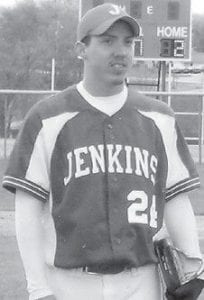 Eric Grimm of the Jenkins High School baseball team received a Bo Upton Memorial Classic Award during the Lincoln County Bo Upton Classic. He is the son of Sonja and David Grimm of Deane. The award and tournament are named for Bo Upton, a Lincoln County High School student who was shot to death on Feb. 1, 2002. Upton had a 3.85 grade point average and was admired by his peers. The award is presented to one player on each team participating in the tourney, based on character and the admiration of peers.