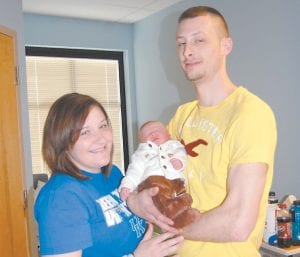 Logan Allen Wilder is the 100th baby delivered by Whitesburg Women’s Center since it opened last fall. Logan was born February 21 at Whitesburg ARH, where the Women’s Center is based. He weighed eight pounds, two ounces. He was 20 inches long. Logan is pictured with his parents, Emily Belcher Wilder and Landon Allen Wilder of Crases Branch. He was delivered by Crystal Gibson, PA-C. (Photo by Sally Barto)