Baby with HIV only 2nd cured 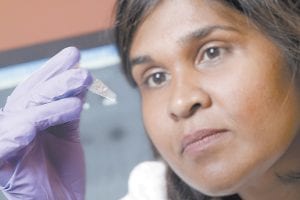 A baby born with the virus that causes AIDS appears to have been cured, scientists announced this week, describing the case of a child from Mississippi who’s now 2-1/2 and has been off medication for about a year with no signs of infection.

There’s no guarantee the child will remain healthy, although sophisticated testing uncovered just traces of the virus’ genetic material still lingering. If so, it would mark only the world’s second reported cure.

Specialists say the announcement, made Sunday at a major AIDS meeting in Atlanta, offers promising clues for efforts to eliminate HIV infection in children, especially in AIDS-plagued African countries where too many babies are born with the virus.

“ You could call this about as close to a cure, if not a cure, that we’ve seen,” Dr. Anthony Fauci of the National Institutes of Health, who is familiar with the findings, said.

A doctor gave this baby faster and stronger treatment than is usual, starting a three-drug infusion within 30 hours of birth. That was before tests confirmed the infant was infected and not just at risk from a mother whose HIV wasn’t diagnosed until she was in labor. 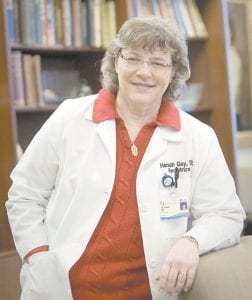 “I just felt like this baby was at higher-than-normal risk, and deserved our best shot,” Dr. Hannah Gay, a pediatric HIV specialist at the University of Mississippi, said in an interview.

That fast action apparently knocked out HIV in the baby’s blood before it could form hideouts in the body. Those so-called reservoirs of dormant cells usually rapidly reinfect anyone who stops medication, said Dr. Deborah Persaud of Johns Hopkins Children’s Center. She led the investigation that deemed the child “functionally cured,” meaning in long-term remission even if all traces of the virus haven’t been completely eradicated.

Next, Persaud’s team is planning a study to try to prove that, with more aggressive treatment of other high-risk babies. “Maybe we’ll be able to block this reservoir seeding,” Persaud said.

No one should stop anti- AIDS drugs as a result of this case, Fauci cautioned.

But “it opens up a lot of doors” to research if other children can be helped, he said. “It makes perfect sense what happened.”

Better than treatment is to prevent babies from being born with HIV in the first place.

About 300,000 children were born with HIV in 2011, mostly in poor countries where only about 60 percent of infected pregnant women get treatment that can keep them from passing the virus to their babies. In the U.S., such births are very rare because HIV testing and treatment long have been part of prenatal care.

“We can’t promise to cure babies who are infected. We can promise to prevent the vast majority of transmissions if the moms are tested during every pregnancy,” Gay stressed.

The only other person considered cured of the AIDS virus underwent a very different and risky kind of treatment — a bone marrow transplant from a special donor, one of the rare people who is naturally resistant to HIV. Timothy Ray Brown of San Francisco has not needed HIV medications in the five years since that transplant.

The Mississippi case shows “there may be different cures for different populations of HIV-infected people,” said Dr. Rowena Johnston of amFAR, the Foundation for AIDS Research. That group funded Persaud’s team to explore possible cases of pediatric cures.

It also suggests that scientists should look back at other children who’ve been treated since shortly after birth, including some reports of possible cures in the late 1990s that were dismissed at the time, said Dr. Steven Deeks of the University of California, San Francisco, who also has seen the findings.

“This will likely inspire the field, make people more optimistic that this is possible,” he said.

In the Mississippi case, the mother had had no prenatal care when she came to a rural emergency room in advanced labor. A rapid test detected HIV. In such cases, doctors typically give the newborn low-dose medication in hopes of preventing HIV from taking root. But the small hospital didn’t have the proper liquid kind, and sent the infant to Gay’s medical center. She gave the baby higher treatment-level doses.

The mother’s HIV is being controlled with medication and she is “quite excited for her child,” Gay added.