Back in his dad’s work truck 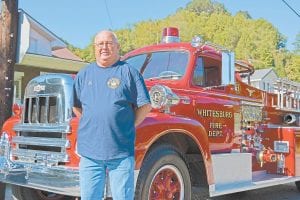 Raymond Lee Day, a Whitesburg native now living in Lexington, was back home recently to drive the fire truck his father, the late Remious Day, helped purchase for the Whitesburg Fire Department a short time after the elder Day became fire chief in 1946. Raymond Day, who moved to Lexington shortly after his father’s death in 1966, returns to Whitesburg each September to drive the truck in the Mountain Heritage Festival Parade through Main Street. (Photo by Chris Anderson)