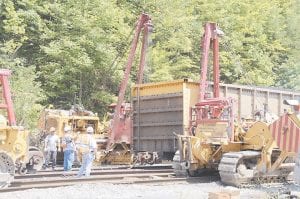 Five cars of a loaded coal train derailed in Letcher County on Sunday morning, damaging the rail cars and track and blocking the busy coal loader at the Sapphire Preparation Plant at Camp Branch. Railroad officials suspect the derailment was caused by a broken rail or a rail that simply tipped over while the train was passing over it. The train, operated by CSX, was made up of 115-ton coal hoppers owned by DTE Energy of Michigan, parent company of Detroit Edison. RJ Corman Derailment Services of Nicholasville cleared the wreckage on Monday. (Photos by Chris Anderson) 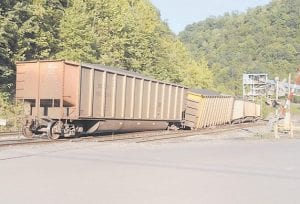