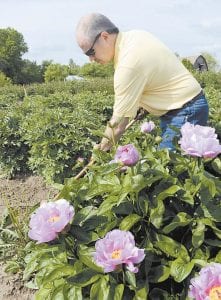 Keith Swenson, who runs a family gardening business, tilled the ground May 20 between rows at a peony acreage. Swenson suff ered disabling back pain for years and after failed surgery, he finally recovered with an aggressive rehab program that exercises the muscles that support the back, enabling him to do the work needed in his business. (AP Photo)

The shocking question came from a respected spine surgeon tracked down by Keith Swenson, who was still in severe pain after an earlier back operation.

He didn’t know what to believe. Two other surgeons had urged more operations, diff erent ones.

And Swenson, who’s from Howard Lake, Minn., is far from alone. Even though only a fraction of people with back pain are good candidates for surgery, complicated spine operations are on the rise.

So is the hunt for any relief.

By one recent estimate, Americans are spending a staggering $86 billion a year in care for aching backs — from MRIs to pain pills to nerve blocks to acupuncture. That research found little evidence that the population got better as the bill soared over the past decade.

“The way medicine is so Star-Treky these days, they believe something can be done,” said Dr. Charles Rosen, a spine surgeon at the University of California, Irvine.

The reality is that time often is the best antidote. Most people will experience back pain at some point, but up to 90 percent will heal on their own within weeks. In fact, for run-of-the-mill cases, doctors aren’t even supposed to do an X-ray or MRI unless the pain lingers for a month to six weeks.

Yet a study last year found nearly one in three aching Medicare patients get some kind of back scan within that first month.

Why is that a problem? Those scans can be misleading. By middle age, most people who don’t even have pain nonetheless have degeneration of their disks, those doughnut-looking shock absorbers between vertebrae. So in someone who does have pain, pinpointing that a particular black spot or bulge on a scan is the true cause is tricky.

The bigger problem: When the misery lingers, there’s no one-size-fitsmost treatment.

“There are a lot of procedures going on for patients in whom we don’t have good scientific evidence that it’s going to help,” said Dr. Richard Deyo of Oregon Health and Science University in Portland, who long has studied how people fare with different options for this tough ailment.

For example, there’s a wide variety of spinal injections that aim to numb back pain, using different drugs and targeting diff erent spots. Which one works depends on what study you read.

When the Institute of Medicine recently listed the 100 how-to-treat questions that doctors most need answered, back pain neared the top of the list.

Lots of things can cause chronic back pain, from arthritis to bone-thinning osteoporosis, which has its own controversy over whether cementing cracks in the spine really helps.

But those cushiony disks are a big reason. They naturally thin and shrink with age. Sometimes they herniate, or rupture, so the gel-like center leaks and pressures a nerve. Sometimes a vertebra slips out of alignment. Sometimes the spinal canal painfully narrows, a condition called stenosis.

The right operation can help, but specialists say only about 10 percent of people with lasting pain are candidates. More than 333,000 of the simpler decompression operations — laminectomies and diskectomies that cut away part of a bone or disk to relieve nerve pressure — were performed in 2007, the latest data compiled by the American Academy of Orthopaedic Surgeons. There were nearly 381,000 spinal fusions, more complex, riskier surgeries that bind vertebrae together with a bone graft and sometimes metal hardware.

There is some hopeful news — increasing evidence that more people should try pushing past the pain in aggressive exercise programs. Deyo calls them boot camps for back pain.

That’s what ended Swenson’s five-year pain odyssey. After a volleyball injury, scans showed he had degeneration in seven disks but one bulged in a way that doctors thought explained the pain radiating down both legs. They cut away part of that spot; it didn’t help. Neither did multiple pain-blocking options.

“Exercise is medicine, but it has to be the right exercise,” said Dave Carpenter, president of Physicians Neck & Back Clinics in Minneapolis, where Swenson finally turned.

The clinic’s rehabilitation program focuses on strengthening muscles that support the spine, and published a study showing that only three of 38 patients prescribed surgery still needed it in the 13 months after completing tailored rehab.

Swenson, now 51, said he was so debilitated that it took several months to improve, plus two years of “maintenance” conditioning. Today, he’s running a thriving gardening business near Minneapolis that ships peonies nationwide. It’s a job that requires tremendous manual labor.

In New York City, Nicia Cortez wishes someone had told her of other options before her 2003 operation on a herniated disk.

“I was naive, and in severe pain. I didn’t think properly at the time,” said Cortez, who felt worse after surgery. It took her six years to work up the nerve to try again, this time a fusion that mostly relieved the pain: “I have my life back.”

Her new doctor cautions that scar tissue and altered anatomy mean each subsequent back surgery has less chance of success than the one before.

“It’s like trying to pave your driveway, layer upon layer, but at some point you replace the whole driveway. We don’t have that ability with the spine,” said Dr. Alok Sharan, spinal chief at New York’s Montefiore Medical Center.

He makes patients exhaust nonsurgical options first, knowing that about one in five who has one back operation will have another in a decade.

“Sometimes people jump to this and think it will be a cure-all, and then five years later you need another procedure. If you’re only 40, that’s a big deal,” Sharan said.

What’s the best advice? First, some types of back pain are accompanied by red flags that need immediate attention — such as numb or weak legs or urinary problems. But for most people:

— Don’t expect an X-ray, MRI or CT until a month to six weeks has passed, unless the doctor suspects a more serious problem. Following that guideline is becoming a quality-of-care measure in many organizations.

— Get back to normal activity as quickly as possible; the days of prescribed bed rest are over.

— Patients with sciatica, pain radiating down the leg, have the best outcomes from those nerve-easing decompression surgeries, Deyo stressed. California’s Rosen said three criteria determine chances of success: a scan that correlates with the pain site; the patient has some weakness; and specific pain occurs when the doctor raises and straightens the legs.

Herniated disks heal on their own over about two years, but surgery for a faster fix is reasonable in good candidates, he said.

— Fusions are appropriate for far fewer patients, those with fractures, unstable or slipping spines, curvature of the spine and rare other reasons, Rosen said.

— Deyo recently studied surgeries for stenosis, that painful narrowing, and found decompression surgery as effective and less risky than fusions, which are more complicated and costly.

— A formal exercise program is especially effective if coupled with cognitive behavioral therapy that teaches patients to manage and function with pain, Deyo said.

— What if surgery fails? Usually, it was the wrong operation or the wrong candidate, said Rosen, who sees one or two patients a week classified as having “failed back syndrome” because of multiple failed surgeries.

Always get a second opinion. Rosen, who founded the Association for Medical Ethics, also recommends asking about a doctor’s ties to companies that make spine-surgery products. That way you’ll feel assured that a recommendation to cut doesn’t come from a too-cozy relationship.

— Not a good candidate? A primary care physician can be a neutral adviser in helping navigate next steps. Patients with more challenging back problems may fare better at a multidisciplinary spine center with numerous specialists — in rehab and pain management — under one roof.

“You don’t want to leave them hanging,” said Rosen.