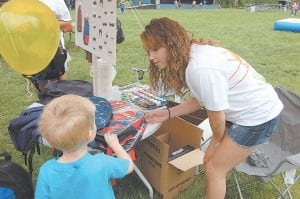 PUTTING OTHERS FIRST — Courtney Jackson, 16, of Jeremiah, helped a little boy pick out a new backpack at the Letcher County Kids’ Day Back to School Bash on July 25 at River Park in Whitesburg. Courtney, who will be a junior at Letcher County Central High School, handed out nearly 90 backpacks before the event officially started at 10 a.m. Children were lined up in front of her table at 9 a.m. This is the second year that Courtney has organized a backpack drive for children in Letcher County. Courtney and her mother Daisy Jackson spent the rest of their time at the event painting mustaches on children’s faces.

In it’s 10th year, funding for the Letcher County Kids’ Day Back to School Bash comes from businesses, local government and individuals.

On the last Friday in July, parents and guardians of school-age children pick up free school supplies under a large tent set up at River Park in Whitesburg.

“I just want to keep doing it to support our families because the need is greater than ever,” said Martha Watts, president of the Letcher County Kids’ Day Committee.

Nearly $5,000 in school supplies has been paid for by Family Resource and Youth Service Centers ( FRYSC). The FRYSC coordinators from each school in the Letcher County district handed out bags containing paper, folders, pencils and other items to students or their guardians.

FRYSC coordinators haven’t totaled up how many children picked up school supplies at the event on July 25, but Watts said that on average 1,100 students have attended the back-to-school event in previous years.

“It seems like the crowd was much bigger this year,” said Watts.

In addition to receiving free supplies for the upcoming school year, Watts said the event is a time for families to have fun together without spending money.

The Letcher County Public Library District sponsored an educational animal program, Animal Tales. Children learned about bullfrogs, toucans, and tarantulas and even had the chance to touch a Burmese python.

The Back to School Bash was started with a $7,000 grant from the Community Collaboration for Children, which was allocated through the Kentucky Cabinet for Families and Children.

Now, activities at the event are funded through local sources. Inflatable rentals and other fees for the event not including school supplies total about $3,000. Funding for the activities consists of $1,000 from the Letcher Fiscal Court, $1,000 from Letcher County Parks and Recreation and $900 from the Whitesburg City Council. Watts said individuals have also contributed.

“As long as we are able to do it and come up with the money, we will have it,” said Watts.

The Letcher County Kids’ Day Committee organizes four events each year. In addition to the Back to School Bash, an event is held in Jenkins in June and an event is held at Calvary Campus in Blackey in September. The committee also helps organize Christmas in Our Hometown in Whitesburg.