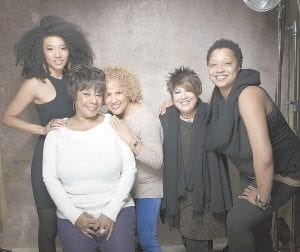 For Merry Clayton, Lisa Fischer and Darlene Love, fame and fortune were just a shot away.

But they never quite hit the bull’s-eye.

The documentary “20 Feet From Stardom” sings the praises of Clayton, Fischer, Love and many other supremely talented background vocalists who either didn’t get into the spotlight, didn’t stay there long, or never got credit even when they took the lead and scored hits.

“I probably interviewed 65 background singers,” noted the film’s director, veteran documentarian Morgan Neville, while promoting the film recently at a recording studio in Hollywood. “I found myself gravitating toward this handful of women who probably should have been stars, could have been stars. And if it wasn’t for one hit, we’d all know who they are.”

After that big break, Clayton got her best shot, releasing the first album on producer Lou Adler’s Ode Records to be issued after Carole King’s legendary “Tapestry.” But Clayton’s solo efforts never clicked. Nor have they yet for Judith Hill, who was set to duet with Michael Jackson on the ill-fated “This is It” tour.

Hill’s dream of being a household name is still alive, but she knows it may never come true. “A lot of times there are so many amazing, great background singers who can be ‘the artist,’” Hill explained. “(But) maybe there’s something in their personal life, or maybe their management can be slightly off. There’s so many things that can easily set off the reason why they are not front and center.”

Some actually were front, center and successful:

— Darlene Love sang the lead on the 1962 chart topping “He’s a Rebel,” but credit instead went to The Crystals, who, as per Love, never stepped foot into the “Rebel” recording sessions. It wasn’t until 20 years later that Love’s own star rose, including gigs on Broadway, in Hollywood, annual performances of her beloved “Christmas (Baby Please Come Home)” on David Letterman’s talk show, and, at last, a Rock and Roll Hall of Fame induction in 2011.

— Lisa Fischer scored a Grammy award, an urban smash and top-20 pop hit with the 1992 single “How Can I Ease the Pain.” But solo stardom was fleeting and soon she was back in the background.

With shrinking production budgets, new technology and the increasing use of home studios, getting 20 feet from stardom may be tougher than ever now.

“There used to be more ways for people to interact and work together in one room, experience something face to face with people, as opposed to just being sort of on your own,” said Fischer, speaking by phone from Montreal while on tour with the Stones. “You try to go into someone’s home where they’re recording, or where they’re writing. It used to be you would bump into people in a studio or at a gig and talk about, ‘I’m doing my record, can you come sing background? That doesn’t happen as often. It used to happen a lot more.”

Merry Clayton admits she still harbors dreams of solo success and, in the film, tears up when talking about failing to become a star. But at age 64, she also seems to have come to at least partial terms with what she has, and has not, accomplished in her career. “You can be a star, but how long is that going to last?” Clayton asked. “You want longevity in this industry. You don’t really want to be a shot away, as they would say. You don’t want to be a shot away. You want to be in the middle of it and you want to thrive throughout the whole journey.”

Added director Neville, “I feel like, at the end of the day, they’ve all struggled with (the lack of stardom), maybe, but they’re proud of what they’ve done, even if there might be some restlessness.”

“Hopefully now, they’ll get that credit,” he said.