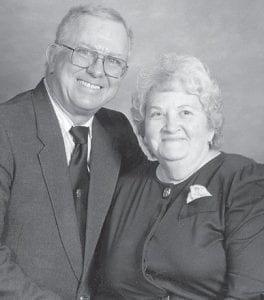 GOLDEN ANNIVERSARY — Lawrence and Barbara (Whitaker) Back will celebrate 50 years of marriage on Sept. 27.

Lawrence and Barbara (Whitaker) Back will be celebrating their 50th wedding anniversary on Sept. 27.

Both attended Stuart Robinson High School in Blackey. They were married at the home of the bride, and honeymooned at Cumberland Falls. Their lives together began in Louisville, where their two daughters were born. They later moved to southern Indiana, where they still live today. Twenty-one years ago they received the anniversary gift of a grandson, Michael Lawrence Harbeson.

Lawrence Back is retired from Philip Morris where he worked as an electrician. He enjoys hunting, fishing and reading. Barbara Back is a retired homemaker and enjoys a variety of crafts. They both enjoy spending time with his brother, Vernon Back, and his wife Mildred (Skinner).

Their daughter Bonita Harbeson lives in Ramsey, Ind., and daughter Jamie Back, in Alexandria, Va. Both work for the U.S. Census Bureau. Grandson Michael lives in Jeffersonville, Ind., and is attending Purdue University.