Backstreet Boys back as men 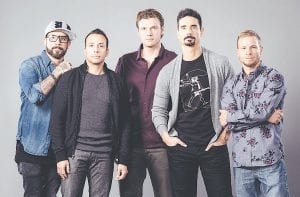 From left, AJ McLean, Howie Dorough, Nick Carter, Kevin Richardson, and Brian Littrell of the Backstreet Boys pose for a portrait in promotion of their theatrical documentary “Show ‘Em What You’re Made Of.” One of the biggest-selling boy bands in history, the Backstreet Boys have experienced highs and lows. They say making a comeback 20 years later and introducing themselves to new fans as grown men in a “boy band” is scary. (Invision/AP)

The Backstreet Boys are back as grown men, ready to share a documentary about their rise to fame.

“Backstreet Boys: Show ‘em What You’re Made Of,” now in U.S. theaters, started off as a small project, filming the guys during a three-week recording session. After finishing a 20-minute promo, the band decided to make a full-length film.

“Our story, our life after 22 years,” said Nick Carter. “It wasn’t like we need to do this movie right now and it has to happen, it just organically did.”

The Backstreet Boys have experienced highs and lows. They say making a comeback 20 years later and introducing themselves to new fans as grown men in a “boy band” is scary.

“In general every album we’ve made even when we were on top of the world and on top of the charts, that was a scary process, and it still is to this day,” said Kevin Richardson.

The band talked in depth about Lou Pearlman, the mastermind behind the Backstreet Boys and ‘N Sync, who operated an investment scam and was sentenced to prison.

“It really wasn’t being taken care of until you open your eyes and go, ‘Damn. We should have looked out for one another, we should’ve helped one another,’” says Brian Littrell. “I think this is the story that really plays true to where we are today, basically boys to men, and we get to show the world what we are made of.”

The movie also talks about how the guys lost their youth to fame and the struggles that A.J. McLean and Nick Carter both encountered before entering rehab.