Bad bite: A tick can make you allergic to red meat 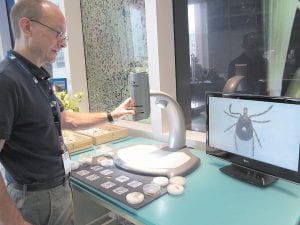 Dr. Colin Brammer, an entomologist at the North Carolina Museum of Natural Sciences, displays a Lone Star tick in a lab in Raleigh, N.C. Doctors across the nation are seeing a surge of sudden meat allergies in longtime carnivores who were bitten by Lone Star ticks, which are found in the Southwest and eastern half of the U.S. (AP Photo)

A bug can turn you into a vegetarian, or at least make you swear off red meat. Doctors across the nation are seeing a surge of sudden meat allergies in people bitten by a certain kind of tick.

This bizarre problem was only discovered a few years ago but is growing as the ticks spread from the Southwest and the East to more parts of the United States. In some cases, eating a burger or a steak has landed people in the hospital with severe allergic reactions.

Few patients seem aware of the risk, and even doctors are slow to recognize it. As one allergist who has seen 200 cases on New York’s Long Island said, “Why would someone think they’re allergic to meat when they’ve been eating it their whole life?”

The culprit is the Lone Star tick, named for Texas, a state famous for meaty barbecues. The tick is now found throughout the South and the eastern half of the United States.

Researchers think some other types of ticks also might cause meat allergies; cases have been reported in Australia, France, Germany, Sweden, Spain, Japan and Korea.

Here’s how it happens: The bugs harbor a sugar that humans don’t have, called alpha-gal. The sugar is also is found in red meat — beef, pork, venison, rabbit — and even some dairy products. It’s usually fine when people encounter it through food that gets digested.

But a tick bite triggers an immune system response, and in that high-alert state, the body perceives the sugar the tick transmitted to the victim’s bloodstream and skin as a foreign substance, and makes antibodies to it. That sets the stage for an allergic reaction the next time the person eats red meat and encounters the sugar.

Hours after eating a burger, “I woke up with very swollen hands that were on fire with itching,” she said. As she headed downstairs, “I could feel my lips and tongue were getting swollen,” and by the time she made a phone call for help, “I was losing my ability to speak and my airway was closing.”

She had had recent tick bites, and a blood test confi rmed the meat allergy.

“I’ll never have another hamburger, I’m sure,” Danzig said. “I definitely do not want to have that happen to me again.”

In Mount Juliet near Nashville, Tennessee, 71-year-old Georgette Simmons went to a steakhouse on June 1 for a friend’s birthday and had a steak.

“About 4:30 in the morning I woke up and my body was on fire. I was itching all over and I broke out in hives. Nothing like that had ever happened to me before,” she said.

A few weeks later, for a brother’s birthday, she ordered another steak. Hours later she woke “almost hysterical” with a constricted throat in addition to hives and a burning sensation. She, too, recalled tick bites.

Dr. Robert Valet at Vanderbilt University said Simmons was one of two patients he diagnosed with the meat allergy that day. He warned her it could be worse next time.

“I never did eat a lot of red meat anyway but when I go out I like a nice fillet. Right now I wouldn’t even eat hamburger meat,” Simmons said.

At the University of Virginia in Charlottesville, “I see two to three new cases every week,” said Dr. Scott Commins, who with a colleague, Dr. Thomas Platts- Mills, published the first paper tying the tick to the illness in 2011.

One of the first cases they saw was a bow hunter who had eaten meat all his life but landed in the emergency department several times with allergic reactions after eating meat. More cases kept turning up in people who were outdoors a lot.

“It seemed something geographical. We thought at first it might be a squirrel parasite,” Commins said. “It took us a while to sort of put everything together” and finger the tick, he said.

Dr. Erin McGintee, an allergy specialist on eastern Long Island, an area with many ticks, has seen nearly 200 cases over the last three years. At least 30 involved children, and the youngest was 4 or 5. She is keeping a database to study the illness with other researchers.

“It is bizarre,” she said. “It goes against almost anything I’ve ever learned as an allergist,” because the symptoms can occur as long as eight hours after eating meat, rather than immediately, and the culprit is a sugar — a type of carbohydrate — whereas most food allergies are caused by proteins, she said.

Allergic reactions can be treated with antihistamines to ease itching, and more severe ones with epinephrine. Some people with the allergy now carry epinephrine shots in case they are stricken again.-á

Doctors don’t know if the allergy is permanent. Some patients show signs of declining antibodies over time, although those with severe reactions are understandably reluctant to risk eating meat again. Even poultry products such as turkey sausage sometimes contain meat byproducts and can trigger the allergy.

“We don’t really know yet how durable this will be” or whether it’s lifelong, like a shellfish allergy, Valet said.

The meat allergy “does not seem to be lifelong, but the caveat is, additional tick bites bring it back,” Commins said.

Michael Abley, who is 74 and lives in Surry, Virginia, near Williamsburg, comes from a family of cattle ranchers and grew up eating meat. He developed the meat allergy more than a decade ago, although it was only tied to the tick in more recent years.

“Normally I can eat a little bit of dairy,” he said, but some ice cream landed him in an emergency room about a month ago. He admitted having had recent bug bites.