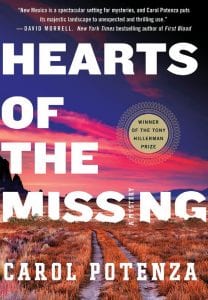 This cover of “Hearts of the Missing,” a mystery by Carol Potenza. (Minotaur via AP)

“HEARTS OF THE MISSING” (Minotaur), by Carol Potenza

Nicky Matthews, a Pueblo, New Mexico, police sergeant assigned as liaison to the Tsiba’ashi D’yini reservation’s police department, has a few things going for her. She’s smart and tenacious. She respects, and has gained the respect of, the native people. And she has so internalized their culture that she’s visited by ghosts who provide warnings and premonitions.

But she also has some things going against her. The reservation’s police chief, who thinks a woman’s place doesn’t include police work, undermines her at every turn. And her long-ago affair with an influential married man, is a constant source of trouble.

When Nicky suspects that an apparent suicide could be murder — and might be linked to a series of violent deaths and missing persons — her investigation is obstructed by her bosses and the elders who run the reservation.

“Hearts of the Missing,” Carol Potenza’s debut novel, is a yarn wrapped in Pueblo Indian mythology, forensic evidence, ancient rituals, DNA tests, evil spirits, greed and violence. The story involves so many characters and such a plethora of twists and turns that readers may find it difficult to keep track unless they pay close attention — and maybe even take notes along the way.

The author, a biochemistry professor at New Mexico State University, is the prepublication winner of the annual Hillerman Prize for the best novel set in the Southwest. However, her prose, while better than workmanlike, falls short of the simple elegance of the late Tony Hillerman’s 18 novels about the exploits of a pair of Navajo police officers.

Potenza does a decent job of evoking the reservation’s stark natural landscape, but she peppers her narrative with granular, often irrelevant, physical descriptions of her characters, including many minor ones. And when they speak, nearly all of her characters sound alike regardless of age, gender and ethnicity.

Still, the baffling mystery and the frequent surprises along the way will reward readers who stick with this story to the end. All in all, “Hearts of the Missing” demonstrates enough promise to justify Potenza’s plan for a series of Nicky Matthews novels.

Bruce DeSilva, winner of the Mystery Writers of America’s Edgar Award, is the author of the Mulligan crime novels including “The Dread Line.”