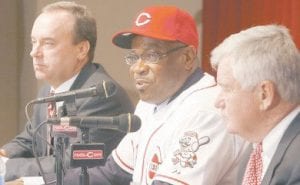 The 58-year-old manager put on a bright red Cincinnati cap and a red-and-white jersey Monday during his introduction as the next Reds manager. The color just didn’t fit.

“This is my first red uniform in my whole life,” Baker said.

As an outfielder, he won a World Series ring while wearing Dodger blue in 1981. As a manager, he has won 1,162 games in San Francisco’s orange and black and Cubs blue.

He led the Giants to the 2002 World Series and got the Cubs within five outs of the 2003 Series, two near-misses that still gnaw at him. After one year of working in television, he’s back in baseball and back on his quest.

“I’m inspired,” said Baker, the first black manager in the history of baseball’s first professional team. “I feel that I was brought here for a number of reasons, not just to manage a baseball team.

“Hopefully we can all come together for the same goal of winning, and we can have that championship ticker-tape parade, which is what I really, really need. I need that badly. You just don’t know how bad I do need that.”

A winning season would be reason for a parade around here.

The Reds haven’t won a World Series since 1990, when Lou Piniella was hired and led them to their sweep of Oakland. They’ve been to the playoffs only one time since then, losing to Atlanta in the 1995 NL championship series.

The city went zany when Ken Griffey Jr. returned to his hometown before the 2000 season, but it was little more than an overnight sensation. The Reds are coming off their seventh straight losing season, their longest such stretch since 1945-55.

They’ve been through two owners and three general managers since 2003. Baker is their fifth manager over that span, following Bob Boone, Dave Miley, Jerry Narron and Pete Mackanin, who took over on an interim basis last July.

About that time, general manager Wayne Krivsky first approached Baker, who was fired by the Cubs after their last-place finish in 2006. Baker spent this year away from the game, using the break to work as an ESPN analyst and spend time with his family.

Baker didn’t hear from the Reds again until after the season. By then, they had decided he was the one they wanted.

“We wanted to come up with the person we felt was the best person to take the Reds forward and bring winning back to the Reds, but also provide the stability, continuity, credibility I spoke about,” general manager Wayne Krivsky said.

Baker was impressed by the way the Reds pursued him, offering a three-year deal.

“This is the place where I was most wanted,” Baker said. “That’s a great feeling when you feel wanted and needed. You go into things with an upbeat attitude.”

He’s the first manager hired from outside the organization since Piniella, who inherited a much better situation. Piniella had a lineup built around Barry Larkin and Eric Davis, a rotation anchored by Jose Rijo and Tom Browning, and the Nasty Boys bullpen that carried the team to its title.

One of the big offseason questions is whether they pick up Adam Dunn’s $13 million option for next season. Dunn became the first player in Reds history to hit 40 homers in four consecutive seasons.

“I want him back,” owner Bob Castellini said Monday. “We’ll see what happens. There’s a strong feeling that we want him back.”

The Reds opened the season with a $69 million payroll, which ranked 20th in the majors. They have a lot of areas to upgrade coming off their third 90-loss season in the last seven years.