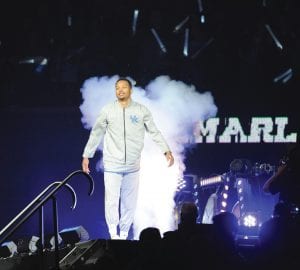 Jemarl Baker, shown at Big Blue Madness Friday, led Kentucky in two drills during the NBA Combine but that did not surprise teammates. (Vicky Graff Photo)

Kentucky’s annual Pro Day — which was on the SEC Network last week and provided another great recruiting edge for coach John Calipari — provided some interesting numbers for the Cats.

Maybe the most eye-popping numbers were that redshirt freshman Jemarl Baker led the team with a 10.24-second lane agility time that ranks among the top 20 all-time best for that drill according to ESPN. He also led UK in 3/4-court sprint time in 3.18 seconds. Next was freshman Immanuel Quickley at 3.21with Keldon Johnson at 3.32. Quickley was also second in the lane agility drill at 10.52 seconds with Ashton Hagans next at 10.76.

“It didn’t surprise me to see what Jemarl did at all,” sophomore Nick Richards said. “He’s quick and he’s athletic. We see that every day in practice. He doesn’t finish first all the time in practice but he’s always the one consistently in front of everybody. He’s a basketball player, not just a shooter.”

“We were practicing those drills and he was always the fastest,” freshman Tyler Herro said. “He’s kind of sneaky like that. He is way more than a shooter as we see every day. He’s a playmaker, good on defense. He is definitely more than a shooter and obviously faster than most people knew.”

Baker downplayed his numbers, too.

“I was just out there doing what I do,” Baker said. “I knew I could run. I know what kind of speed I have but I didn’t expect to be the fastest or have one of the best times ever. But I still have to go out on the court and show what I can do.”

Reid Travis led the Cats with 18 185-pound bench presses with Nick Richards next at 17. Baker was third with 10. Fastest in the shuttle run was Quade Green at 2.93 seconds with Brad Calipari — yes, the coach’s son — second at 2.96.

The top vertical jump — 37 inches by Quickley. Johnson, Richards and Washington were next at 36.5.

One measurement that stunned me — Travis had the lowest body fat percentage at 6.44 percent with Quickley next at 6.51 and Hagans 7.0. Washington, who weighed 228 pounds, came in at 9.7 percent body fat. The highest body fat — Tyler Herro at 12.4 percent. Richards weighed a teamhigh 244 pounds but his body fat was 7.51.

“I worked really hard to get where I am at,” Travis said. “I think the thing I learned through the process is it’s not so much the weight at the end of the day; it’s getting the body fat down and moving a lot better and moving a lot quicker like I can now.”

His team may not win a state championship and he may not win Mr. Football, Gatorade Player of the Year or the Hornung Award given to the state’s top player. However, don’t doubt that Glasgow lineman Tanner Bowles is a special player.

“Tanner has started for four years and his sophomore year he received his first Division I offer,” said Glasgow coach Jeff Garmon. “A lot of kids could have settled for that and just played it out. Not Tanner.

“He wanted to go against players all over the country and was fortunate that he got to go to a lot of national camps. Some days he had great camps and there were days he said, ‘This kid got me.’ But he wasn’t afraid to fail. He wanted to know how good he was compared to kids across the whole United States.”

He was good enough to get about 40 Division I offers before verbally committing to defending national champion Alabama just like former Kentucky prep standouts Damien Harris and Jedrick Wills did when they made their college choices.

“Committing to Alabama has not changed his demeanor. He’s one of best players in the state and also one of hardest workers on our team,” the Glasgow coach said. “He spends a lot of time in the weight room. He’s always had that drive. When you get recruited at that level, all the players have that work ethic within them and want to be the best.

Garmon rattled off Ohio State, Stanford, Oklahoma, almost every SEC school and most Big Ten teams as those who had recruited the 6-5, 280-pound Bowles. Most of those schools have “moved on” since his verbal commitment to Alabama but several schools, including Kentucky, have stayed in touch.

The Glasgow coach said UK offensive line coach John Schlarman had a “great relationship” with Bowles and did an “outstanding” job recruiting him.

“Kentucky was on his top five list and a lot had to do with Schlarman. He gave him good, sound advice. I think to this day him and Schlarman have stayed in touch,” Garmon said. “Coach Schlarman is a good guy. He understood where Tanner was and he wanted him.

“Tanner went to camp at Alabama the last two summers and did really, really well. Alabama really liked that he can play multiple positions — center, guard, tackle. He has the mobility and skills to do all that and they see that as a great asset. The Alabama coaches told me you never see Tanner on the ground in camp or film. They said they can find guys that size all over the United States. The question is finding guys who can move and have the coordination they wants. The only time Tanner is on the ground is when he is finishing off a block.

“The offensive line coach and quarterback coach both came here. Tanner has gone to a couple of games at Alabama this season and they really seem excited to have him. Some other coaches wanted Tanner to visit and come to a game but he wants to honor his commitment to Alabama. Some kids might keep taking visits but he feels he’s committed. Alabama is where he wants to be and he believes going out and looking at other schools is not a good look for him.”

Garmon says Bowles knows some believe he will be overmatched at Alabama. Many thought the same about Harris and Wills, who are both starters this year. Wills played in 11 of 14 games as a true freshman in 2017 and Harris almost opted for the NFL before returning to Alabama for his senior year. He’s rushed for 2,558 yards and 17 scores in his career.

“He wants to see if he is good enough to do it. People have said he will not last, not make it. He will find out it is a different animal at Alabama,” Garmon said. “But he wants to see if he has what it takes or not. He just wants to go down there and see if it works out.

“Some kids take the safe route but he wants to put himself out there and go to the best place in the land and see where he stacks up. He’ll either flourish or fall by the way side. There’s not room to survive in the middle in a place like that going against the best kids every day. He knows that and he’s fine with that challenge.”

What makes Vince Marrow such a convincing and successful recruiter?

That’s what I asked April Snell, junior running back Benny Snell’s mother. Marrow came into Ohio and convinced both Snell and running back A.J. Rose to be part of the same recruiting class and both have been steals for UK.

“He has a way of seeing a player’s potential. When he came after Benny, Benny had offers but not like 20 offers like some players do,” April Snell said. “Vince could see what he was doing on the field and how it would benefit Kentucky.

“Vince has a keen perception of what players can bring when he picks a player. He has a keen eye for talent and how that player will fit on the team. He is very well liked and respected. He has Ohio on lockdown.”

Kentucky senior Maci Morris said her team’s exhibition trip to Italy in August was “awesome” for many, many reasons.

“The scenery obviously was just great. It was awesome so see so many things. Those structures and buildings that are there after hundreds and hundreds of years are just incredible,” Morris said.

The Colosseum in Rome was one of her favorite spots.

“Being in a place where they saw gladiators and animal fights was something. That was my favorite place other than Lake Como. Venice was very populated and very touristy. We didn’t spend much time there but it is a beautiful city. I wish I had got on a gondola but it was cool just being there and seeing them.”

What about the food?

“It was delicious. The gelato was great. I had it at least once every day,” Morris, who said her favorite meal might have been lasagna and a T-bone steak, said.

She said one meal coach Matthew Mitchell had a seafood platter that included a barnacle — a marine crustacean with an external shell that feeds by filtering particles from the water — that had been attached to a cruise ship.

“They fry it as a delicacy. He said he just could not eat it,” Morris said. “I tried some raw salmon.”

Mitchell claimed he didn’t remember trying to eat a barnacle and said he thought Morris was confused. However, he agreed with her that the food was outstanding.

“When we were on the runway in Rome I told (my wife) Jenna that I hoped the plane could get off the ground because I weighed so much because I ate so much good food,” Mitchell said.

Morris said the basketball competition was good but the biggest surprise was running into UK fans who were not part of the tour with the team.

“We had quite a few people at games. There were a lot of people from Kentucky surprisingly there saying, ‘Go Cats.’ People that were not on the tour with us. Big Blue Nation really is everywhere,” she said. “It was a good amount of time for us to be there and I could have stayed longer. It was a nice trip and was really fun. Most of the people were really nice. It was just like America with a different mix of people. I just loved it.”

Quote of the Week: “Calipari never gets enough credit for developing players. Everybody thinks he just chooses what top 15 players he gets. He gets no credit for finding

Shai Gilgeous-Alexander, Eric Bledsoe. He gets a lot of guys like Devin Booker that turn out way better than their rankings and become important players for UK,” Sporting News columnist Mike DeCourcy on UK coach John Calipari.

Quote of the Week 2: “I wouldn’t say he bruises me up. We usually go back and forth with each other. We play to make each other better,” Nick Richards on facing Stanford transfer Reid Travis in practice daily.

Quote of the Week 3: “I don’t have an offer but they are talking to me a lot. It is a big time program and they have a really big stage. I have heard good things about the coaches. I want to be a pro. That’s my dream and they do a great job with that,” 2020 shooting guard Johnny Juzang of California on being recruited by UK.