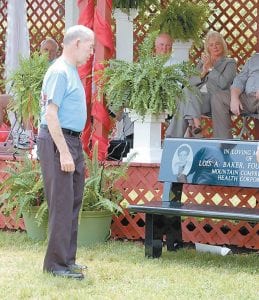 The late Nathan Baker was photographed in 2011 at an event held in honor of his wife, Lois A. Baker.

Baker, 82, died Saturday at the East Kentucky Veterans Center in Hazard after a long illness.

He had a long career in public service, beginning with a stint in the U.S. Navy, to which he volunteered in 1954. In August 1970, he was appointed chief of the Whitesburg City Police Department and held that position until January 1982, when he resigned so he could be sworn into office as Fourth District Magistrate on the Letcher Fiscal Court.

In November 1998, Baker was elected mayor of Whitesburg. He was reelected to that office in November 2002 and served through 2006.

Baker’s wife, Lois Adams Baker, preceded him in death in June 2010. Mrs. Baker was the longtime chief executive officer of Mountain Comprehensive Health Corporation, a federally funded system of healthcare clinics that she helped found in 1971. The couple married in 1959 in Clintwood, Virginia. Mr. Baker worked for the organization for a few years after his wife’s death.

He was also preceded in death by a son, Scotty Baker, a brother, Fred Baker, and a sister, Rosemary Baker.