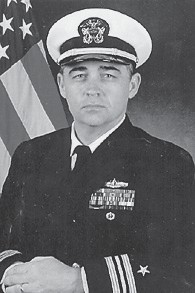 A son of Clarence and Lois Baker of Millstone, he is married to former Whitesburg resident Susanne Ritter Baker, daughter of Pauline Ritter Combs and the late Gobel Ritter. The couple have two children, Alex and Sarah.

In his new role as a high school instructor, he works to show how the NJROTC program can better prepare a student for further education as well as enrich the time in high school.

According to The Cairo
Messenger,
Baker says his immediate focus is to grow the NJROTC program and to begin building a reputation of excellence that are already hallmarks of the sports and band programs at Cairo High School. He says his intent is not to compete with other programs, but to off er students another option for building leadership skills and challenging the physical, intellectual and leadership capabilities of the cadets.

When Baker was stationed in West Palm Beach, Fla., he says, he worked with the Navy Sea Cadets, which led to his interest in becoming a high school instructor. As a student at Morehead State University, he was enrolled in a teacher education program.

“Growing up in a small town in eastern Kentucky without even a traffic light has given him an affinity for small town life,” says The Cairo Messenger.
“Moreover, he hopes to open up a world beyond Cairo by tapping into his vast travels and experience in the military. ‘Being part of the Navy even at this level, broadens their (students) horizons to see that there’s more out there,’ he says. ‘I’ve literally been around the world.’”

Baker was commissioned in 1986 through the Naval Officer Candidate School in Newport, R.I., and served aboard the USS Saratoga as DC Division officer and assistant first lieutenant, then aboard the USS Dale as fire control offi- cer where he participated in the boarding and searching of merchant vessels in the Red Sea during Operation Desert Storm.

He left active service in 1992 and worked with the Naval and Marine Corps Reserve Center in Lexington. He was commanding officer of the Naval Reserve Naval Station Panama and Naval Reserve USS Antietam units before being called back to active duty in 1996. He returned to sea duty in 2000 aboard the USS John F. Kennedy.

Baker took command of the Naval and Marine Corps Reserve Center West Palm Beach in 2001. During his tenure, the center received the Sidney Fields Award for outstanding mission effectiveness as well as the Commander Naval Reserve Readiness Command Southeast 2002 and 2003 Supply “E” Awards.

He was director of manpower and personnel and director of operations and training at the Naval Reserve Readiness Command Southeast in Jacksonville, Fla., then commanded the Navy Operational Support Center in West Palm Beach, Fla. He completed his fourth sea tour aboard the USS Ronald Reagan as assistant operations officer from 2007 to 2009, and then became executive officer of the Explosive Ordnance Disposal Expeditionary Support Unit One.

Baker holds a bachelor’s degree in government from Morehead State University and a master’s of public administration degree from the University of New Orleans.