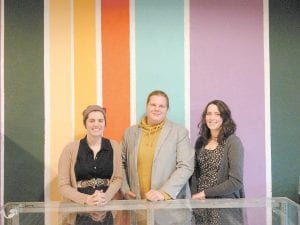 Owners/operators of Here Comes the Bun are, from left, Becca Peterson, Kyle Kadel and Carrie Wells. The bakery is located in the old Hoover’s clothing building.

A new bakery, sandwich shop and deli is set to open on Main Street in Whitesburg on Thursday.

Here Comes The Bun will be operated by three friends in their mid-20s who say they have wanted to own a business and have fun while doing so.

Carrie Wells, of Johnson County, moved to Whitesburg in August 2011 and began teaching art in Cordia. When she was younger, Wells visited Whitesburg many times with her father, who is a musician, and her mother, who is an artist.

Wells said opening a bakery has been a dream of hers, but she couldn’t do it alone.

In early April, two of her friends, Kyle Kadel of Somerset and Becca Peterson of Hot Springs, Ark., visited Wells and agreed to pitch in and start the bakery with her.

“When they came down they really saw the potential,” said Wells. “Main Street needed businesses and everyone has been supportive. ”

They found a building on Main Street in June to rent. Here Comes The Bun is located in the building where the men’s and shoe departments of Hoover’s Department Store once were. Curve’s weight loss center moved in after Hoover’s closed. The space was then occupied for a while by Level Up games. 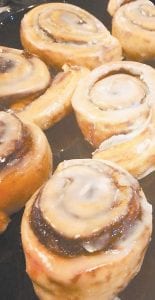 The owners of Here Comes the Bun on Main Street have been practicing making cinnamon buns before the bakery opens later this week.

Peterson had been baking at Fat Bottomed Girls Cupcake Shoppe in Hot Springs, Ark., while also teaching German and Russian classes at the University of Arkansas. She moved to Whitesburg in September.

In early December, Kadel packed his belongings and headed to Letcher County from Lexington, where he had been taking college classes.

Peterson and Kadel are now roommates, living above Here Comes The Bun. Wells also lives in a Main Street apartment.

The three friends have spent the last few months overseeing the remodeling of the shop as well as figuring out the menu and the logistics of running a bakery.

Hardwood floors have been restored. New paint has gone on the walls, including colorful stripes on the wall near display cases for baked goods. New tables and chairs fill the space. 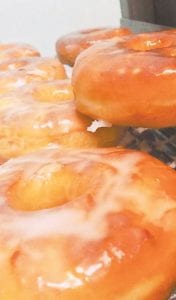 By popular demand, doughnuts like these prepared at Here Comes the Bun last week will be offered for sale daily when the bakery opens in Whitesburg later this week.

Wells has a background in architecture and art. She has lined up art exhibits to be on display at the bakery for months to come. Art now hanging on the walls belongs to her mother and other people Wells says have been supporters of the bakery.

Peterson credits her grandmother for teaching her how to bake and cook. Peterson has managed two pizza restaurants where she learned to work with dough. She has also baked breads for a restaurant.

“She is amazingly talented,” said Kadel.

The shop will offer five different kinds of cupcakes each day. Vanilla, chocolate and maple bacon will be standard choices with two additional cupcakes. Maple bacon is a corn muffin with bacon and topped with a maple icing.

The bakery will offer cakes and pies of the week. Customers can buy a slice or the whole pie.

Doughnuts will be made each day, but once they are gone for the day there won’t be more until the next day. In addition to glazed and chocolate doughnuts, filled doughnuts and éclairs will be made from time to time. Doughnut holes will also be sold.

At first Here Comes The Bun wasn’t going to offer doughnuts for sale, but the trio says doughnuts have been the most requested.

“You have to be willing to do different things,” said Wells. “I think we are all flexible.”

Fresh bagels and croissants will also be on the menu. The bakery will have a coffee bar and teas, homemade pickles and sourdough cider.

The menu consists of 11 specialty sandwiches and five salads ranging from hearty meat options to vegetarian items. Customers who don’t see something they want on the menu can build their own sandwich or salad.

Meats will be freshly sliced on a meat slicer, and customers can buy meat buy the pound. Hamburgers and Hot Brown Sandwiches will show up as a daily special. Broccoli and cheese soup and tomato basil soup will also be offered daily, along with a soup of the day.

Breads baked daily will include sourdough, focaccia, whole wheat and rye bread. There will also be special breads of the week.

“We don’t want to be too much of one thing,” said Peterson, adding that the bakery doesn’t want to take away from anything that anyone else is doing in local restaurants. Peterson said she knows there are several people in the area who make specialty fondant cakes and cupcakes.

Special orders are welcome with advance notice of 24 hours.

“ I don’t know what someone could say that we would say no to,” said Peterson.

When Kadel was 19, he and a friend came up with names of businesses based on puns. Here Comes the Bun is a spin on The Beatles’ hit “Here Comes The Sun.” Bread Nugent, Grateful Bread, The Rolling Scones and Biscotti Pippin were other ideas for names.

The name of the bakery seems to suit the trio who come across as laid back and easy to get along with.

“We just laugh and joke around,” said Wells.

Here Comes The Bun, which will offer free WiFi, will be open from 7 a.m. until 3 p.m. Tuesday through Sunday. The bakery will be closed on Mondays.