Bald eagle found in coyote trap will be released here 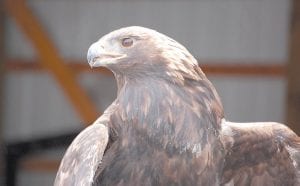 RARE SIGHT — This young bald eagle was slightly injured after its claw got caught in a coyote trap at Dry Fork last week. Bald eagles are not often seen in Letcher County. The bird was scheduled to be released in Whitesburg on Wednesday afternoon. (Photo by Sally Barto)

U.S. Fish and Wildlife Service officials gave the okay on Tuesday afternoon to release the bald eagle back to the wild. Employees of the extension office are inviting the public to watch the eagle fly.

“Bald eagles are a beautiful site and to be able to see this up close will be a once-in-a-lifetime event,” said Lee Adams, staff assistant of the Extension office.

A Kentucky Department of Fish and Wildlife biologist will place a metal ring around the eagle’s foot with a number on it before the bird is released so it can be identified if it is ever found again.

A federal Fish and Wildlife official will assist with the release of the bald eagle today at 4 p.m., at the edge of the parking lot of the extension offi ce located at 487 Extension Drive, Whitesburg.

“I would love for people to get to see that eagle,” said Frank Campbell, captain of law enforcement 7th District for the Kentucky Department of Fish and Wildlife. 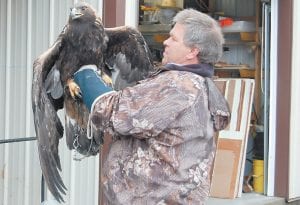 TO BE RELEASED — Master falconer Mitch Whitaker held a two-year-old bald eagle at the Letcher County Extension Office in Whitesburg. The bird was rescued after it got caught in a coyote trap at Dry Fork on January 27 and will be released today (Wednesday) at the extension office. (Photo by Sally Barto)

The bald eagle was rescued last Thursday night after it was caught coyote jaw trap on an abandoned strip mine at Dry Fork, about 100 yards from the site of a new Appalachian Wireless cellular phone tower. Dale Brown, whose father Raymond Brown owns the land where the bird was found, said he and his father saw a deer acting strangely while standing about 20 yards from the legal trap on Jan. 27. As they walked closer, they realized the animal in the trap was a bald eagle. Dale Brown said the trap was holding the bald eagle’s claw, but the said the bird wasn’t badly injured.

“Not even a feather was broken,” said Dale Brown. “It’ll be just fine.”

Dale Brown said fresh hog meat was placed in the trap a few hours before the eagle was found. Mitch Whitaker, a master falconer who has a federal license to care for injured birds, said a bald eagle’s diet mostly consists of fish, but said the bald eagle must have been hungry and eaten the hog meat.

Dale Brown contacted Campbell and Kentucky Fish and Wildlife official Jason Slone, who helped the bald eagle out of the trap and transported it in a dog kennel to the Letcher County Extension Office, where Whitaker has a raptor rehabilitation program.

Whitaker, of Roxana, took the bald eagle to Appalachian Animal Hospital in Hazard on Friday to be treated by Dr. Gene Smith. Whitaker said the bald eagle was given antibiotics as soon as it got to the veterinarian’s office.

“It is being monitored to make sure it is up to health,” said Whitaker. “They are being cautious with it, too. We don’t want to rush anything.”

Whitaker said the eagle was never aggressive but is attentive, perky and docile. He said the only injury to the bird is a scraped knuckle.

“For it to be such a small injury, this is going to be a perfect ending story,” said Whitaker.

The immature bald eagle is estimated to be about two years old. The eagle will molt its feathers until the fifth year when its head will be completely white as well as its tail feathers.

The bald eagle is thought to be a female although a sexing test was not done. It weighs about nine pounds.

“It’s the most awesome thing you have ever seen,” said Whitaker. “Those bald eagle are in a class by themselves. They are a special bird.”

Whitaker said bald eagles, which serve as the symbol of the Unites States, are no longer endangered but are still a threatened species.

No one really knows why the eagle was in Letcher County. Whitaker said Fish and Wildlife officials say a storm maybe have blown it off its course. He also said until two adult parents are found in this area, it cannot be confirmed that the eagle is from Letcher County.

“This is a big rarity,” said Whitaker. “Who would have thought we would have gotten a bald eagle? I don’t think I will ever get to hold an eagle again.”

Campbell said he has never seen an eagle up close in Letcher County before.

“ Usually about this time of year you will see an eagle or two passing through,” said Campbell. “About every January I have seen one fly over.”

The eagle is one of the first few birds to be cared for through the Extension office’s raptor rehabilitation program.

Whitaker said a larger facility will be built so he can care for eagles. “Right now the largest birds we can keep are hawks and owls,” he said.

Whitaker said he has learned some new facts about eagles during the last week. “They have special adapted feet that help them hold onto fish,” he said. “Their nests can be up to 10 feet wide. That’s as a large as a kingsize bed.”