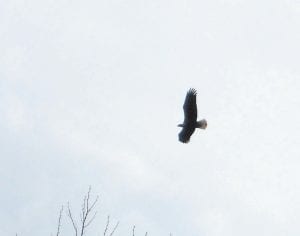 A bald eagle was photographed in flight over Fishpond Lake at Payne Gap on the afternoon of December 27. Mountain Comprehensive Health Corporation CEO Mike Caudill, who took the photograph, said he first saw the fully mature eagle sitting at the upper end of the lake, but the bird started to fly away before he could get his camera in place for a close-up. Caudill said he was eventually able to capture this photo by setting his camera on full zoom before the eagle left the area. (Photo by Mike Caudill)