By MICHAEL O’MALLEY
The Plain Dealer 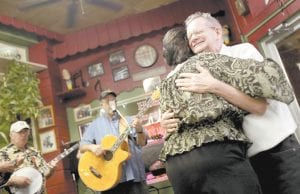 It’s another Tuesday night at the Curbside Coffee shop, and Harold King, a 71-year-old guitar player, is off the bandstand clog dancing with 75-year-old Irene Moore.

The crowd gets a kick out of King as he swings that big potbelly and cranks those rickety legs to some of the best bluegrass music this side of the Appalachians.

Still, the crowd gives him a big hand, followed by a knee-slapping laugh when someone yells out, “That’s the worst Irish jig I’ve ever seen.”

King is the leader of the Bluegrass Kings, a quintet of pickers a little over the hill but with fingers that can still fly double time.

Their home on Tuesday nights is the Curbside, a hole-in-the-wall coffee shop on the city’s west side.

The place sits along a stretch of too many empty, dark storefronts, killed by the economy. But when the Kings strap on the strings, the Curbside corner comes alive.

“All we need in here is a potbelly stove and it’d be just like down home,” said Kings fan Doug Harmon, 67, of Cleveland’s Old Brooklyn neighborhood.

For most of the Kings and the bluegrass crowd, “down home” is in the hills of West Virginia.

“I was raised in a coal camp on Greenwood Mountain,” said Ray “Ducky” Ward, 74, the Kings’ mandolin man. “My mother was a banjo picker. I started playing when I was 7 or 8. I never took no lessons.”

Ward left the mountains in 1958 to work in an aluminum factory in Cleveland.

At that time, West Virginians had a saying, “Readin’, writin’ and Route 21,” which meant that after you got out of school, you packed your bags and headed up the road — old Route 21 — to Cleveland or Akron to look for work.

“You had to come up here or starve to death,” said Curbside regular Bob Perry, 62.

Thousands of West Virginians came here to work assembly lines, drive big trucks and make steel. The musicians among them got their pickin’ fingers dirty with factory grit, but that didn’t hinder bluegrass from taking root on the city’s west side, where most of Cleveland’s Appalachians settled.

“They played in hillbilly bars and places like this,” said Perry, who came here from West Virginia when he was a kid. “That’s how they kept from being homesick, by playing bluegrass music with people they knew.”

Today, live bluegrass is rare in Cleveland because of changing demographics. The white, Appalachian transplants continue to move out of the West Side, replaced by blacks, Hispanics and Arabs.

The old-timers at the Curbside are the last of the real McCoys.

“You don’t find nothing like this around town anymore,” said guitar player Lloyd Blevins, 56, who regularly sits in with the Kings.

The Curbside is a long, narrow place with a coff ee bar and rows of chairs for about 50 people facing a small bandstand in the front window. The walls, lighted with white fluorescent, are decorated with a collection of hanging guitars, banjos, mandolins and other strings, all tuned and ready to play.

“Customers come in, take a guitar down off the wall and play me a song,” said Curbside owner Judy Fitch. “They play to make me happy.”

Fitch and her late husband, Terry, opened the Curbside three years ago. Terry, who died about a year ago, had asked the Kings, his longtime buddies, if they wanted to play in his place. All he could afford to off er them in return was free coff ee.

“They play for the fun of it,” said Fitch. “They play to keep my coffee shop afloat. I call them my guys. They’re the greatest guys in the world.”

On a recent Tuesday, it’s standing room only for the Curbside Kings. Bald Paul, who sings and plays Irish music, is in the crowd. So are Hillbilly Bob and Hobo Bob. Mike Pota, 88, a yodeler in a big cowboy hat and buckaroo boots, sits in his usual spot along the wall, selling 50-50 raffle tickets.

Old Will Bush, 80, hooked to an oxygen tank, is wearing a ball cap with words above the bill: “God Has Been So Good To Me.”

When one of them steps to the mike for an instrumental solo, the others gracefully move aside in rhythm, as if in a minuet — though sometimes on the tiny bandstand their big bellies bump.

And the Kings fire up a foot-stompin’ favorite, spurring the crowd to clap and tap along in time.

“These guys are all selftaught,” says Kings fan Carl Smith, 66, a guitar player from LaGrange in Lorain County. “They couldn’t read a note of music to save their lives. They all learned on the front porch.”

“These guys are some of the best pickers in the state — maybe the country,” says Jack Smith, 68, a retired truck driver. “With Ducky on mandolin, Dallas (Griffie) on banjo and little Harold (Roland) on Dobro, wow.”

For three hours, the Kings work their bluegrass repertoire, mixed with a little gospel and a few country tunes. “If Jesus comes tomorrow what then?” they sing, followed by a Dolly Parton tune.

Everyone sings along, and right at the resolve, “By and by Lord, by and by,” the crowd’s on its feet, calling it a night.

Pota sets down his plastic raffle bucket and lets loose a yodel as he shuffles toward the door. Roland packs up his Dobro and wipes the sweat off his face.

Fitch hugs and kisses her way through the crowd, calling everyone “honey.”

The scene has a feel of a holiday house party winding down as the kin head home.

“We don’t make no money,” says King, stacking chairs on the countertop. “But we sure have a lot of fun.”