Suspect talked about ‘temptation’ and taking pictures of young students 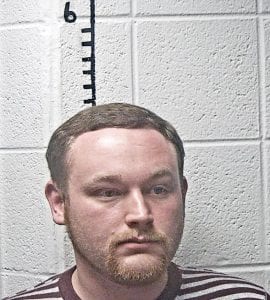 The arrest of a Neon man on child pornography charges became more urgent in December when police turned up a SnapChat message from the suspect.

That message was followed by one even more chilling for parents and police.

“Hopefully I can get pics of students through my fake account and I’ll send u,” the second message reads.

It was not clear with whom Bates was communicating.

Bates, 23, was band director at the L.F. Addington Middle School and Central High School in Wise County, Va. He was arrested last week on 20 child pornography charges after Kentucky State Police say he sought out explicit pictures of children on social media sites.

Bates was arrested February 12 at his home in Wright’s Trailer Court. Bates was a neighbor of Nathan Jarrod Stidham, 39, who was arrested less than a month before on 1,000 counts of child pornography. It was not clear whether the two cases are related.

Kentucky State Police Detective Jason Dials wrote in the arrest citation that troopers and detectives had been conducting an undercover Internet Crimes Against Children investigation, and discovered Bates had been using social media sites to message others about sharing material depicting child sexual exploitation. Images and videos were then located on his account, however “only 20” counts were listed in the citation. The citation says Bates admitted to operating the account and sending the messages.

According to court documents, Kentucky State Police began the investigation after receiving a complaint October 14, 2019, reported from the National Center for Missing and Exploited Children. The report was submitted by Omegle, an Internet chat site that connects users to random strangers. The report, which outlined conversations online on August 25, said there had been messages on Omegle from someone discussing trading “young nudes.”

Omegle captured the IP address of the computer used, and authorities cross-referenced that IP address to an additional Cybertip from SnapChat. The SnapChat incident occurred on August 7, 2019. Twenty-five files were uploaded on that date, court documents say, and when police reviewed those files, they found child sexual exploitation material. Dials then obtained search warrants for Omegle and Snapchat, and for the IP user.

When KSP received the material from Omegle, the documents say, it contained messages related to sharing child pornography, and when the SnapChat return arrived it also contained references that appeared to show child pornography was being traded or shared. That return, received by Kentucky State Police on November 22, included the June 28 message showing that “James Holbrook,” the alias police say Bates used online, had been hired by a middle school.

The messages said “Holbrook” was 22 years old, and a further search showed the user name “DaltonBates17.”

KSP learned in the IP address was being used by Bates’s grandmother, and that Dalton Bates, was living with his grandmother at the time the messages about getting a teaching job and obtaining pictures of students were sent. Police learned Bates had moved out of his grandmother’s house in the fall of 2019, and they traced him to his new home in Wright’s Trailer Court at Neon Junction.

After police confirmed Bates was employed at the school, Dials obtained a search warrant for Bates’s home, vehicles, his person, outbuildings and electronic devices.