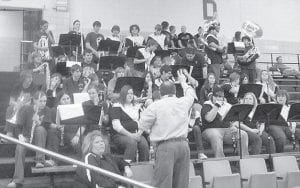 The Letcher County Central High School Band joined with the Knott County Central High School Band for an impromptu performance under the direction of KCC Band Director Bob Saylor. The bands played three songs, “Barbara Ann”, “Gimme Some Lovin'”, and “The Final Countdown”, together between the LCC and KCC games in the district tournament. The LCC band performed at every LCC game, both boys’ and girls’, during the tournament.