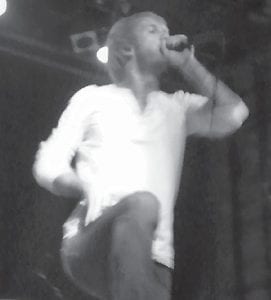 Craig Owens, lead singer of the band Destroy Rebuild Until God Shows, performed at Bogart’s in Cincinnati recently. Owens and other members of his band headlined the Strength In Numbers Tour that included four other groups.

A group of buses and vans entered the snowy city of Cincinnati looking like the circus was coming. But instead of tightropes and elaborate costumes, this convoy arrived at music venue Bogart’s with enough instruments and amps to fill the entire city with sound.

The five bands that rolled into Bogart’s on Feb. 24 were playing the 29th show of the Strength in Numbers (S.I.N.) Tour, creating a diverse lineup that kept the audience on their toes much like a circus would. Headlining this alternative rock spectacle was the band Destroy Rebuild Until God Shows (D.R.U.G.S.).

Only a few years ago, all four members of D.R.U.G.S. were in different bands still looking for success, including lead singer Craig Owens. Owens was the front man with post-hardcore band Chiodos until Sept. 2009. He formed D.R.U.G.S. in August 2010, about two years after he tried to overdose on the prescription drug Xanax while suffering complications of bipolar disorder.

While the acronym may appear to be poking fun at the former addict’s past, what those letters stand for — Destroy Rebuild Until God Shows — is a phrase that serves as a reminder for all four members (each of whom was in previouslyfailed band) to keep dreaming and to never give up on their music.

After the release of their selftitled album in February 2011, the group opened for several bands but eventually set out on its first headlining tour this January. Hoping to leave tour audience with a memorable show, D.R.U.G.S. enlisted four opening bands for the S.I.N. tour. They are Action Blast, Sparks the Rescue, and two bands native to Ohio, Like Moths to Flames and Hit the Lights. All four bands share elements similar to the diverse sounding headliner, and each proved worthy of the crowd’s attention and, like a good circus act, entertaining enough to keep the anticipation for the final performer at bay.

As music started pouring through the speakers, members of D.R.U.G.S. took the stage one by one as they picked up their instrument. Owens soon followed, stepping out from behind the curtain and into the spotlight much like a ringleader himself to conduct the madness that would soon fill the venue. While this was happening, the band’s loud drums and metal guitars played by members Matt Good, Nick Martin and Aaron Stern provided an introduction as Owens and Good each took a deep breath and belted the band’s multi-vocal anthem, “The Only Thing You Talk About is You.” The audience quickly recognized the chant and joined in to give the band even more confidence and send smiles spreading across the faces of Good and Owens.

The band members later ripped through most of their catalogue of songs including, “Graveyard Dancing,” “Hangman” and “Mr. Owl Ate My Metal Worm,” all of which showed off Owens’s diverse vocal spectrum of high-pitched solid notes and low-pitched raspy growls similar to a performing circus lion.

An unusual occurrence happened later in the show when all members of the band except Owens left the stage and Owens was handed an acoustic guitar. Silent for the first time since he took the stage, Owens built up his courage and began addressing the elephant in the room. With a deep breath he said, “Raise your hand if you have struggled with something recently.” After looking around at the abundance of hands in the air, Owens said, “Thanks for being honest. For those of you not raising your hands, you are insecure and are going through a struggle at this very moment. But that’s okay, because I’ve been there and it was not too long ago when I was in your shoes going through a toxic drug addiction that almost ended it all. So right now I’m going to sing a song that I wrote to help me through it … It’s called ‘I’m Here to Take the Sky.’” With those words he played the opening chords and began to sing as the audience joined in to create a choir of sorts. The moment left Owens so shocked that he stepped back from the microphone to take in the beautiful sound of the fans. As he stepped back behind the microphone, the rest of the band joined him to finish the song.

As the show continued, the crowd constructed a death wall (a type of mosh pit where the crowd parts to form an empty space and then charge at one another) and a circle pit (when the crowd runs in circles creating a whirlpool of people) while singing along with every remaining song.

The group wrapped up the show with their song, “If You Think This Song is About You, It Probably Is” and thanked the crowd for showing their support. Hours later, the vans and buses left Bogart’s and returned to the streets of Cincinnati. Though they still looked like they were carrying a traveling circus, there was no questioning the fact that their contents proved to be far more entertaining.