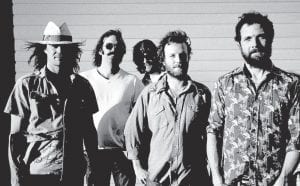 If you like the music of The Allman Brothers Band, The Byrds and The Band you’ll like Truth & Salvage Co. The band will perform its outstanding remake of Joe South’s “Games People Play” at Summit City in Whitesburg on Saturday night.

Editor’s Note: The Nashvillebased country-rock band Truth & Salvage Co., which was formed in California and has been compared to a cross between the bands The Eagles and Black Crowes will appear in concert Saturday at Summit City in Whitesburg. The following story appeared recently in USA Today.

Whether you’re looking for a helping hand, a boost of energy or a little companionship at night’s end, Truth & Salvage Co. has an album for you. The group’s album Pick Me Up, which was released in late July, offers songs for those occasions and an even broader array of musical styles.

Pick Me Up creates its sounds from building blocks that include California country-rock, folk, gospel, even ‘80s Southern college rock.

“We have a feel-good record with a lot of singing and a lot of playing and a lot of different stories being told,” says guitarist Scott Kinnebrew, part of the group’s rotating cast of singers. “We have four different people singing lead throughout the whole record, so it’s jubilant. It took a little while to get a record we were proud of, but it really came out better than we expected.”

The album begins with the gospel-style harmonies of The Bad Times, then segues into Silver Lining, which recalls the angular guitar sounds of ‘80s R.E.M.

“We were trying to start the song, and we kept referring to the sound of R.E.M.’s Orange Crush,” Kinnebrew says. “It came off like a machine-gun smash.”

Other highlights of the album include first single Appalachian Hilltop and a cover of Games People Play, a 1969 hit for both singer- songwriter Joe South and country singer Freddy Weller. The South cover came at the suggestion of the Black Crowes’ Chris Robinson, who produced the band’s 2010 debut, Truth & Salvage Co.

“When we were working with him, he kept on saying we had to cover this Joe South song, but we never got around to it,” Kinnebrew says. “A couple years passed, and we heard it on the radio. We started working it up, and it’s definitely a fun one. We have a blast singing that song.”

The group originally formed in California with roots in North Carolina and throughout the South. About a year and a half, the members of the band moved their base to Nashville.

Truth & Salvage Co. recorded Pick Me Up at Echo Mountain Recording Studio in Asheville, N.C., producing the album with Jon Ashley. “It was two weeks of recording bliss,” Kinnebrew says. Longtime friend Bill Reynolds from Band of Horses mixed the album. “He’s been hearing us playing since back in ‘97, back in North Carolina days,” Kinnebrew says.