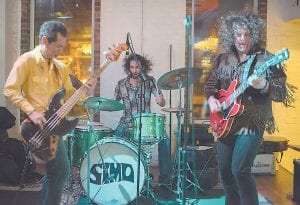 Nestled in the beautiful, yet tiny town of Whitesburg sits Summit City — a venue that I made my first trip to Saturday night. The venue is small, but its reputation is growing.

On this night, I made the 150- mile journey to catch a band that we talk a lot about here at “Unsung Melody.” In fact, this band was our “2013 Unsung Artist Of The Year.” I’m obviously talking about SIMO. The Nashville-based blues trio came to such a small town at the urging of Greg Napier, a WMMTFM programmer who books many of the club’s bigger shows. He is doing his best to keep rock alive. For that, we salute him.

SIMO is a band whose members aren’t shy about who they are. In fact, they embrace their retro vibe fully, complete with vintage instruments, clothing and the souls to match. This is music you feel, and I was stoked to finally witness their power, to say the least.

Also on the bill were Josh Pennington, a singer-songwriter from the region whose version of “Hungry” by Temple Of The Dog stood out.

Next up were Ordinary Fools, a Hazard band with a sweet set of bluesy, classic rock covers ranging from Jeff Beck to Joe Cocker.

After taking the stage around 10 p.m., SIMO brought the venue to life. Gone were the dinner plates and in there place were people dancing and throwing up their arms. In layman’s terms, it was on. Leaving behind their seats, people moved closer and closer to the tiny stage. That’s the power of music. It’s also a sign that something magical is happening.

The highlights started from the first note of “Right Now” and didn’t stop until the final notes of the extended jam on Howlin Wolf’s classic “Evil.” The dynamics SIMO presents in a live environment are incredible. Bassist Frank Swart drives the bass line deep into your soul, as drummer Adam Abrashoff brings a Mitch Mitchell (The Jimi Hendrix Experience) vibe to the show. This is of course all layered by that unmistakable vintage Marshall tone from JD Simo. These guys truly put the power in power trio.

While JD is clearly the star, don’t you dare think this is a one-horse show. Frank Swart, in my humble opinion, is one of the most talented bassists I’ve ever witnessed. His tone is tremendous, and to be honest, sounds 10 times better live than on the band’s recordings.

You can’t have a complete rhythm section without a great drummer and Adam Abrashoff is a lot like John Bonham (Led Zeppelin). Not so much stylistically, but in the sense that the notes he doesn’t play are just as important as the ones he does. With the screaming guitars that JD provides, you need to understand how to allow room within the song structure and by holding back, Adam does just that.

Other songs that stood out on the night were “I’ll Always Be,” the Curtis Mayfield classic “Fool For You” and new song “Rise” (at least I think that’s the title). A lot of those are available on the band’s debut disc. The set packed plenty of punch and the extended jam sessions, drum solo and small stage made for a great night.

SIMO is the complete package and a band that is clearly on its way to great things.

I honestly can’t wait to see these guys on a bigger stage with a full light show, but this show is one I’ll never forget.

Jonathan Newsome is a Letcher County native and graduate of Letcher High School. He now lives in central Kentucky, where he operates UnsungMelody.com, an Internet music site whose contributors have been and continue to be involved in the music business.