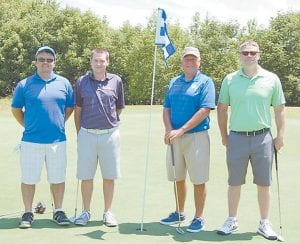 The Rotary Club of Whitesburg and Letcher County Chamber of Commerce hosted their annual Golf Scramble at Raven Rock Golf Course in Jenkins on Friday, June 10. Six teams participated in the scramble.

The longest drive was made by EQT player Larry Slone, and ARH player Jerry Haynes took the honor of closest to the pin.

Community Trust Bank and ARH provided door prizes, and ARH provided lunches for all golfers and event workers. The winning team received gift cards for the Raven Rock Pro Shop. Funds raised through the golf scramble will be used to fund scholarships associated with the Chamber of Commerce Work Ethics Program and Rotary Club of Whitesburg service projects.