Bankrupt Peabody was owner of ‘world’s largest shovel’ in Ky.

By JAMES BRUGGERS
The Courier-Journal 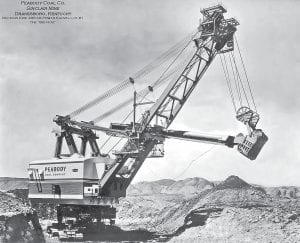 With U.S. coal giant Peabody Energy filing for bankruptcy — the latest in a line of coal companies to go broke — my thoughts immediately turned to none other than legendary singersongwriter John Prine.

You know that song, Paradise, about coal trains and the Green River and strip mining.

When I was a child my family would travel. Down to Western Kentucky where my parents were born. And there’s a backwards old town that’s often remembered. So many times that my memories are worn.

There was more than just the coal trains. There was that giant shovel.

Then the coal company came with the world’s largest shovel. And they tortured the timber and stripped all the land. Well, they dug for their coal till the land was forsaken. Then they wrote it all down as the progress of man.

The Courier-Journal was there to cover the Western Kentucky stripmining story in all its angles. Including the giant shovel, known as Big Hog. Big Hog was featured in C-J Sunday magazine in August 1965, back when I was just starting elementary school in Michigan. Staff writer Jim Morrissey took a close look at the Tennessee Valley Authority and its Paradise power plant, in a story that reminds us of just how long we’ve been fighing over coal and mining. TVA, the story began, “long a shining example of Federal government functioning at its all out best, finds itself in a strange, disquieting position. TVA is getting tarred and feathered with strip-mine criticism, and it smarts.”

Morrissey noted that a “superhighway,” that would be the Western Kentucky Parkway, was responsible for a lot of the criticism because people witnessed the devastation from their cars.

“People see the torn up land and our plant, and say: ‘TVA’s at it again, ruining the country,’ an unnamed TVA officials was quoted as saying.

The next month, columnist Joe Creason noted that it had taken 120 years, but Muhlenberg County, where coal mining started in 1820, had finally become the nation’s top coal producing county.

Take that, West Virginia and Wyoming.

Much of the credit went to Peabody’s giant shovel, which could strip away 200 cubic yards of overburden in a single bite.

“This shovel weighs as much as a Navy cruiser, stands 20 stories high, and can pick up 300 tons of dirt and rocks, deliver it 450 feet away, and be ready for the next cut in 50 seconds,” Creason wrote.

It could have moved all the dirt in the Panama Canal in three years — “a job that required thousands of men using lesser machines nearly 20 years to complete. And that, mind you, with only one man at the controls.”

The C-J was there also at the end for Big Hog.

Staff writer Tim Roberts in April 1986 wrote a front-page story under the headline: “Immense coal shovel scooped out its place in history, then its grave.”

No longer the world’s largest, and replaced by draglines, the famous shovel uncovered 80 million tons of coal in over two decades. The story explained how Peabody was going to bury it in its tracks, as part of reclamation.

“It looks like a shame to put her under,” Bill Carver of Greensville, who ran the shovel for 15 years and was in charge of its last shift a few months earlier, told the newspaper. Amazingly, it had been powered by electricity from the nearby Paradise plant.

That plant’s first two units went online in 1963 and were then the largest in the world, each at more than 700 megawatts apiece. Peabody Energy spun off its Kentucky coal assets in 2007 to Patriot Coal, which has also fallen into bankruptcy.

Roberts in 1986 noted that Muhlenberg County had run out of large tracks of land containing coal easily scooped from the surface. That was pretty much Prine’s assessment, too.

And daddy won’t you take me back to Muhlenberg County. Down by the Green River where Paradise lay. Well, I’m sorry my son, but you’re too late in asking, Mister Peabody’s coal train has hauled it away.