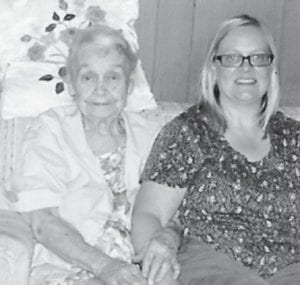 Duane and Anna Yonts attended the high school graduation of their grandson, Zachary Ferris, in Athens, Ala. Zachary will be attending North Alabama University in the fall. They also reported a good time visiting with Jeff and Amie and Joey and Donna.

Rebecca Eskew, the daughter of Jill Eskew and the granddaughter of Carol Caudill, was graduated from Lakewood High School in Sumter, S.C. Jill, Carol and Cora Eskew attended the graduation. Rebecca was voted most creative by her classmates. She is a very talented artist.

Tori, Callie and Ella Akers spent a week with her parents, John and Barbara Banks. Callie and Ella enjoyed playing with their cousins and friends. Saturday they went to Kingdom Come State Park for a picnic with the family, Rusty, Aunt Carol, and Robert and Kathy Sword’s family. They came home on the Little Shepherd Trail to look for bears, but didn’t see any.

The grandchildren of the late Patrick and Etta Banks got together for Memorial Day weekend at the Bernard Banks farm in Mt. Victory. Those attending were: Charles Hammond of Pikeville; Patrick and Marilyn Banks of Edinburgh, Ind.; Donald Banks, Linda Lucas, and Carol Caudill, all of Cowan; Bryon and Tammy Banks of Kingdom Come; Gwen, Chris and Mattie Handlon of Milton; Penny and Ben, Seth, William, Little Ben and Holly Holbrook, all of Taylorsville, Ind.; Janie Bentley of Elizabethtown; and Jimmy Banks of Hodgenville.

Marietta fed them wonderful food and took care of everybody. Pat and Marilyn were the best host and hostess ever. They made everyone feel welcome.

Paula Lowe sent family pictures for everyone to enjoy. There was a storytelling contest, but a clear winner could not be determined. Everyone’s stories were hilarious.

A great time was had by all and they are looking forward to next year.

Jerry and Charity Hall of Columbus, Ind., Laura Harris of Lexington, and Ramona Caudill all recently spent a week in Florida. They visited Rex Sturgill of Ft. Myers and Glynna Hamilton of Naples. They spent time enjoying the beach, sightseeing, relaxing and catching up on news of the family.

Sherrie, Bradley and Joseph Brown visited Carol Caudill for a few days. They enjoyed visiting friends and family. Joseph especially enjoyed visiting his special friend, Scott Ramage, and getting to see all of Scott’s animals and plants.

Randy and Eula Brown’s grandson, Cameron, and his friend, Heath, spent a week of their summer vacation visiting with them.

Jason, Amanda and Eli also have been visiting off and on while Amanda is doing clinicals in Letcher County again. They had enjoyed a vacation at Myrtle Beach. Eli was in awe of the ocean and enjoyed the sand, but his favorite was the hose used to wash off the sand.

Ben Miller, his wife and little boy of New York, had also visited his parents, Doris and Charles Miller, and grandparents Earl and Juanita Profitt.

Katelyn Callahan of Advance, N.C., spent the week of June 1-7 with her nanna, Linda Lucas on Cowan. They had fun. Katie always loves her Cowan kinfolks. She got to visit the newly opened Pine Mountain Outfitters, surprising her cousin, Billy Bentley, the owner. She visited Doris Caudill, Ryan and Becca Bates, and her great-aunt, Virginia Brown.

They had a good supper at Eddie Jack and Marcia Roberts’s. Cousins Paula and Eddie Lowe took them elk sighting. They didn’t get to see any elk, but had a good time trying.

We got to enjoy Jack and Bessie Day’s good hospitality again at one of her delicious fish fry suppers. Bessie is a great cook, and they always have an abundance of food and fellowship. Their son, Randy, and grandson, David, were there, and Charles and Faye Banks, Virginia and myself.

We enjoyed Friday at Virginia’s with a good potluck dinner and a good afternoon of visiting with Thelma Ison, Anna Yonts, Carol Caudill and Elsie Banks. We really appreciate Carl Bennett for bringing Elsie over. She is still ‘the life of the party’ though she won’t admit to being one of the ‘feisty girls.’