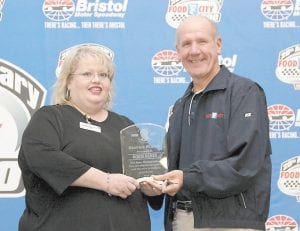 Doris Banks of Whitesburg is one of 11 Food City employees from parts of three states who have been rewarded for their “outstanding volunteerism.”

Banks and the others honored by the Claude P. Varney Volunteer Recognition Program were publicly recognized during a corporate luncheon in Abingdon, Va. Each was given an outstanding service achievement award and a $250 contribution to their charity of choice.

Banks works as floral manager in Food City’s Whitesburg store, where she has been employed for 14 years. She was honored for her 12 years of volunteer work with the American Cancer Society’s Relay for Life, for her visits with hospice patients, and for her volunteer work at Letcher Manor Nursing Home, where she collected more than 200 lap quilts for residents last Christmas.

From among the 11 district winners, two divisional winners will next be selected and honored with a plaque and a $500 charity contribution.