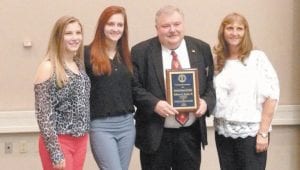 “I’m truly honored and humbled with the award,” said Banks. “I hope to continue serving my county for years to come.”

Banks was surprised after being presented the award during a banquet at the Lexington Convention Center.

“Edison is a tough prosecutor who is a tremendous help to my Office of Special Prosecutions, having accepted 12 appointments as a special prosecutor this past year alone,” said Kentucky Attorney General Jack Conway.

After the recent deaths of Banks’s mother-in-law and fatherin law, Banks almost didn’t attend the conference. His wife insisted that he go.

“I had a heavy heart worried about my wife,” said Banks. “I felt guilty being there.”

When a member of Conway’s staff walked Banks through double doors into the banquet room Thursday, he saw his wife Pam and daughters Nicole, 19, and Haley, 13.

“I was totally surprised,” said Banks. “It couldn’t have come for me at a better time.”

“ He remains committed to helping combat the scourge of prescription drug abuse in the Commonwealth,” said Conway. “I appreciate his tireless efforts to fight illegal drug use in his community and help keep Kentucky families safe.”

Also as a new commonwealth’s attorney in 2001, Banks said he made trouble over a blue ink pen. When Banks placed his first order for office supplies, he wasn’t familiar with the approved supply list of the Administrative Office of the Courts (AOC). He tried to order BIC pens with blue ink, but was told he could only order the same pen with black ink. Banks insisted on blue ink pens because he liked to sign his name in blue ink, making it easier to identify original copies. He wrote emails and made phone calls with no success of having blue ink pens added to the approved list of supplies.

When Assistant Deputy Attorney General Mitchel Denham presented the award to Banks, he also gave him a blue ink pen.

Banks often says that if he ever gets to where he doesn’t like his job, he needs to move on to something else.