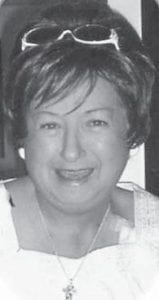 Born in Jenkins to the late Authur and Altie Stidman, she was the widow of Edsel Vaughn Banks