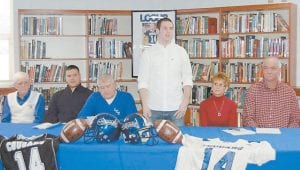 Last week I had the honor of seeing one of the finest young men you will meet sign a scholarship offer to do what every athlete dreams of — to play at the next level. I’m talking about Charlie Banks of Letcher County Central High School.

Banks was the star attraction at a press conference at Letcher Central last Wednesday to announce he had accepted a scholarship offer from Eastern Kentucky University.

Cougars Coach Hillard Howard let me know early in Charlie’s career that he would be a special player. He is that and more. He is an outstanding student and a leader in whatever he is doing.

Banks quarterbacked the Cougars to back-to-back final eights in the state and has received more awards than you can count. During the signing ceremony he gave credit to everyone who helped got him to where he is, including teammates and coaches.

Banks has been a joy to watch and has shown the younger players that hard work and dedication pays off. We wish him the best at EKU and hope the Cougars can carry on the tradition established by Banks by setting the bar a little higher while he works to achieve his dream.