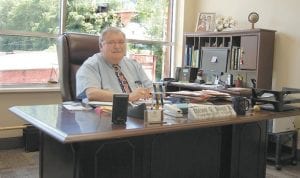 Letcher Commonwealth’s Attorney Edison G. Banks II and his staff have unpacked and are settled into their new location on the second floor of the Letcher County Health Department.

“We’re happy,” said Banks, who has been prosecuting attorney for 14 years.

More space was needed in order to store case documents, Banks said, and the City of Whitesburg didn’t have a larger space to offer.

“We wanted to accommodate him and find him a new home,” said Letcher County Health Department Director Matthew Combs.

The health department, which moved to its new location in 2009 on the former site of Suburban Motel, has the square footage that Banks was looking for and, Combs said, the Letcher County Board of Health wanted the 2,187 square feet used.

The health department downsized after some programs and services were no longer funded. Offices for the Health Access Nurturing Development Services (HANDS) program, which is a home visitation program for new parents, were located where the commonwealth’s attorney’s offices are now. The HANDS program relocated to a nurse’s suite on the first floor of the health department.

“They all did a good job,” said Banks.

Watts, Victim’s Advocate Felicia Wright and secretaries Kristi Skeens and Linda Bell each have their own office in the health department building.

The new location is equipped with a security system that will require members of the public to enter the waiting area and speak to the secretary through a window before entering the inner offices.

The eight-year lease with the health department includes janitorial services.