Banks wants judge to rule his opponent ineligible for ballot 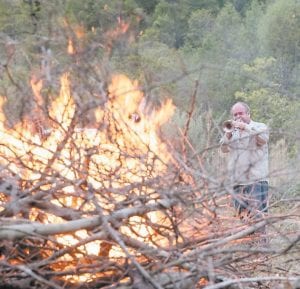 Ellis Keyes played a trumpet as the sun set on a bonfire as it was being lit on his property at Love’s Branch near Colson last fall. Photographers and reporters visited Keyes’s property while persons associated with white nationalist groups were staying there. Letcher Commonwealth’s Attorney Edison G. Banks II has filed court action asking that Keyes be declared ineligible to run for the office Banks now holds. (Photo by Tod Seelie, The Village Voice)

The Letcher Commonwealth’s Attorney’s race may be decided in court instead of at the ballot box.

Incumbent Edison Banks is challenging his opponent’s qualifications, saying Ellis Keyes is not a lawyer, as he claims he is, and is therefore not eligible to run for the county’s top prosecutor’s office.

Banks declined to comment, but referred questions to his attorney, Adam Collins of Hindman.

Keyes says he is a lawyer because he has filed cases in court. When asked if he has a law license, Keyes said one is not required.

“Any citizen can practice law. It’s a common occupation,” he said.

Collins, however, said Kentucky does require a law license, and Keyes doesn’t have one.

“He’s unqualified to be a Commonwealth’s Attorney,” Collins said. “He’s not a practicing attorney and that’s a statutory requirement.’

According to Section 100 of the Kentucky Constitution, “No person shall be eligible to the office of Commonwealth’s Attorney unless he shall have been a licensed practicing lawyer four years.” 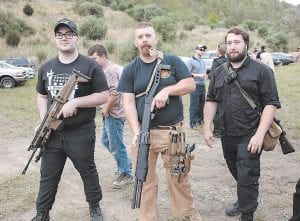 Attendees at the white nationalist assembly that took place on Ellis Keyes’s property at Loves Branch last fall showed off their weapons the evening before they attended a controversial rally in Pikeville. (Photo by Tod Seelie, The Village Voice)

In order to be licensed, a law school graduate must take the Multistate Professional Responsibility Examination, and pass the Kentucky Bar Exam, which is administered by a seven-attorney panel appointed by the state Supreme Court.

Keyes did not answer directly when asked if he is a member of the bar, instead saying that the bar is “a special union,” and that he is a lawyer under “constitutional law.”

A search of Kentucky, Louisiana and California Bar Association membership directories shows no entry for Keyes. Banks is listed as having been admitted to the Kentucky bar in 1985.

Keyes said he attended Loyola University School of Law in New Orleans and graduated, “about 1974.” Keyes, 61, who is originally from Chalmette, La., would have been only 17 years old in 1974. The registrar’s office at Loyola did not return phone calls Friday or Monday, and was closed for Mardi Gras on Tuesday.

A Commonwealth’s Attorney’s responsibilities include presenting cases to grand juries, and prosecuting felonies and capital offenses.

Keyes has filed multiple lawsuits in different courts representing himself, but there is no record here of him representing anyone else. He ran for sheriff four years ago, and county judge/executive eight years ago, losing both times. He ran for mayor of San Francisco, Calif., in 1995, coming in seventh in a field of seven, and ran for alderman twice before that, also coming in last, according to the San Francisco Chronicle. The newspaper identified his occupation as a taxi driver. C-Span, which interviewed him before a mayoral debate in which he did not participate, identified his occupation as a student at San Francisco State University.

Keyes said in the C-Span interview that he was running as a candidate of the “Life Party.”

“My philosophy is life is a party and you are the Party of Life,” he said.

His platform was that he would do away with searches for weapons in government buildings as a remedy for what he called a government and a criminal justice system “run and controlled by criminals,” and to “spread the good news: Life is a party.”

Keyes gained notoriety in April 2017 for providing camping and rallying space for white supremacists after their reservations were cancelled at Jenny Wiley State Park when park officials found out that the “family reunion” they had booked space for was actually a white supremacists convention.

The group was in the area for a white power rally in Pikeville, but according to police, many stayed on Keyes’s property in Loves Branch in Letcher County.

Photos from The Village Voice show Keyes playing the trumpet beside a bonfire during the evening’s events, and dozens of armed men wearing swastikas and KKK patches, many with white nationalist gang tattoos.

The group at Keye’s property included well-known white nationalist Matthew Heimbach, whose Traditionalist Workers Party organized the Pikeville rally and who police served with a criminal summons during the event for an incident at Donald Trump rally .

Heimbach entered an Alford plea last July to seconddegree disorderly conduct for screaming at and pushing an African-American woman protesting at the Trump rally in Louisville. Heimbach did not admit guilt, but acknowledged there was enough evidence to convict him. He was fined $145 and was given 90 days in jail, probated on the condition he not commit another offense in two years and that he attend anger management classes.