Banks was guest at UofL 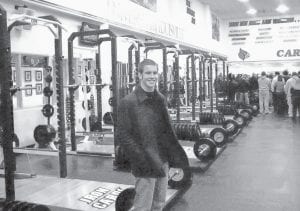 Letcher County Central quarterback Charlie Banks was invited to attend the University of Louisville’s game against Rutgers. He is seen here in UofL’s weight room before the game.

Banks, a 6’3″ quarterback who rushed and passed for 39 touchdowns this past season for the Cougars, is catching the eye of several major colleges across the country with his strong passing arm and his running ability. In addition to passing for 2,010 yards and 19 touchdowns this season, Banks also rushed for 827 yards and 20 TD’s. Only a junior, he is expected to be heavily recruited as a senior in 2008.

Banks said the visit was the “experience of a lifetime.” He was given a tour of the Cardinals’ indoor practice facility and stateof the-art weight room and spoke with recruiting coordinator Greg Nord and quarterbacks coach Jeff Brohm. He also was on the field to watch the Cardinals warm up before the game.

“It’s awesome to see and talk with coaches from one of the premiere programs in college football,” Banks said. “It also let me know how hard I have to work during the off-season to get to that level.”

Banks is an easygoing young man who is finding success both on and off the football field. As a result of maintaining a 3.85 grade point average, he was chosen as a Rogers Scholar, an academic award named in honor of 5th District U.S. Rep. Harold “Hal” Rogers. Banks said he praises God for his ability and credits the hard work of his teammates and coaches for allowing his ability to be noticed.

“I play with the greatest bunch of guys imaginable,” said Banks, “and the coaches care about me as a person as well as a football player.” Banks said it also helps to know he has the support of school officials, including Letcher Schools Superintendent Anna Craft. “It makes you feel pretty good when the superintendent calls you to check up on what’s going on with you,” he said.

Banks said he will always remember Letcher Central’s 2007 season, which was stopped short late last month by eventual Class 5A champion Ft. Thomas Highlands. The Cougars finished as district champions with a record of 11-2.

“The way the fans of this county embraced us was one of the most fun experiences a kid can go through,” Banks said. “It makes me want to be even more successful next season. When we are on the road and we have as many fans as our opposition, the only word to describe it is awesome.”

Banks said he would like to thank Letcher Central head coach Hillard Howard and offensive coordinator Ben Howard for accompanying him to Louisville for the visit. He said that while he gets plenty of support from his coaches and his parents, Steve and Tommye Banks of Sandlick, he draws his inspiration from his older sister, Whitney.

“My ‘sis’ set the bar pretty high with the teachers she had, and they are the ones I am having now,” Banks said. “She always encourages me and is always there cheering me on. You know, when I think about it I am really a blessed person.”