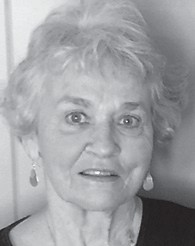 A daughter of the late Prentice and Sarah Tackett Burke, she was the widow of Jack Morgan. She died January 5 at the Greg and Noreen Wells Hospice Care Center in Hazard.

Mrs. Morgan was a member of Deane Baptist Church and the Eastern Star.

Surviving are two daughters, Robin Morgan of Pineville and Cynthia Gooch and husband Chris of Hazard; two brothers, Jemmie Burke and wife Carol of Neon, and James Burke and wife Linda of Brandenburg; a sister, Vivian Sergent of McRoberts; three grandchildren, Whitney Howard and husband Josh of Pineville, Jonah Gooch and fiancée Hannah of Hazard, and Kassidy Gooch of Hazard; a great-grandchild, Lillian; three sisters-in-law, Allie Burke and Virginia Morgan, both of McRoberts, and Peggy Crosbie of Lexington; and a special friend, Connie Hurt of Hazard.

Mrs. Morgan was preceded in death by her grandparents, G.W. and Maggie Burke and Silas and Inas Tackett, and a brother, Kenneth Burke.