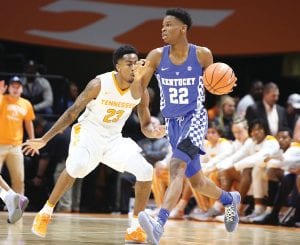 Terry Barker knows he can’t control how University of Kentucky fans will remember his son, Drew Barker. He just hopes a couple of off-field incidents during his son’s freshman year will not distort what fans remember about him now that he decided to trans- fer after spending four years at UK.

“I hope a couple of off-field incidents will not define his legacy at Kentucky,” Terry Barker said. “People who know Drew know both of those incidents were not ones where Drew meant any harm.”

He finished his career with 57 completes in 113 attempts for 747 yards and five scores with seven interceptions. He redshirted in 2014, started the final two games of 2015 and started three games in 2016 before a back injury ended his season.

Barker and three teammates were suspended for one game and charged with disorderly conduct for having airsoft guns out on campus. Later in the year Barker was involved in a bar fight in Richmond and then sucker punched in the side of his head by an Eastern Kentucky football player in an Eastern dorm.

Terry Barker said his son and friends were “just messing around and playing on campus on a Sunday night” with the airsoft guns and never anticipated it would turn into a situation where campus would be shut down. The bar incident/fight was one Barker could have made a better choice but give him credit for owning his mistakes and maturing the next three years

Also don’t forget that he was the bellcow for UK’s 2014 recruiting class when not everyone believed in coach Mark Stoops and the Kentucky program. Barker said no to South Carolina early and never wavered in his commitment and loyalty to Stoops.

“There was no decommitment, no wavering. He was all in and tried to recruit guys to come to UK with him,” Terry Barker said. “He did his best to bring guys with him from day one and I hope fans will remember that about him. It did not work out on the field. Sometimes that happens. But he loved Kentucky.”

Simple, he wants to play next year. He might have been the leader to become UK’s starting quarterback next year but is looking for an offense that will fit his skills better. No, the arrival of junior college quarterback Terry Wilson did not lead to the transfer.

“We just want to find an offense that will throw the ball more and do so well that we hope Kentucky fans will say, ‘I wish we had him back,’” Terry Barker said. “He wants his collegiate career to end on a high note. He wants to play well enough to get an invitation to the NFL combine and show his arm off. The NFL is a passing league and that’s what he does best.

“But I just hope fans will always remember he was fully committed to us when we were down and low. He tried to drag kids with him to Kentucky. Drew had one foot in the door at South Carolina when Kentucky brought Mark Stoops and (offensive coordinator) Neal Brown in and that gave him renewed energy about UK. That kid was born with blue blood out of the crib.”

Stoops understood Barker’s decision. Stoops has to recruit the best players he can each year. Players have to do what it takes to give them the best chance to play. It’s just business, nothing personal.

“Mark told Drew that he still believes he has the ability to play beyond college. He said he just wished it had worked out for Drew at Kentucky and he would do anything for him and we appreciate that,” Terry Barker said.

Shai Gilgeous-Alexander has been on an upward trend like few Kentucky players in recent seasons the last few weeks — or was before he went 1-for-6 in the loss at Tennessee.

He was ranked below every UK freshman signee except Jamarl Baker but now could be UK’s best and most dependable player in large part because of his ability to get to the rim and finish shots.

“Shai’s got the perfect basketball body. He’s long, he’s got a short torso, long legs, long arms, and he’s really crafty with the ball. He doesn’t depend on athleticism to score at the rim. He can finish at a lot of different angles,” Barbee said. “That was Rod Strickland. He could get to that rim and there would be three 7-footers swatting at the ball and the next thing you know, the ball is going in the basket. You’re like, ‘How did he get it in there?’ It’s the same thing with Shai.”

Barbee said it was vintage Gilgeous-Alexander against Louisville, one of the nation’s best shot blocking teams, when he had no fear going inside.

“He knows how to use angles and knows how to use that rim to protect and finish no matter who is in there. So he’s kind of the ideal guy when you look at him with his game, driving that ball in the paint, able to finish the ball right hand, left hand just as effectively. So he’s a difficult guard if you let him get downhill and get to that rim,” Barbee said.

Don’t think that is something coaches, including Calipari, can teach.

“Instincts make a fantastic coach and he’s got a lot of great instincts,” Barbee said.

Signing former Kentucky offensive lineman Larry Warford to a four-year, $34 million deal has turned out to be a great move by the New Orleans Saints. Going into the playoffs, the Saints had run 77 plays — the fourth most in the NFL — behind Warford, a guard, and averaged 6.2 yards per carry. That was the league’s second best mark.

Warford picked UK over Auburn and Louisville after playing for Madison Central High School in Richmond. He was ranked as the 30th best guard in his recruiting class. He went on to start 37 straight games for UK from 2010- 2012 and earned all-SEC honors.

Detroit made him a third-round draft pick in 2013 and he became a starter as a rookie. He did not give up a sack in 2013. After four years with the Lions, New Orleans added him this year as a free agent.

Adair County freshman Zion Harmon already has scholarship offers from a lot of schools, including Tennessee and Vanderbilt, and has drawn major interest from Kentucky, Kansas and others.

“Heart over height. That is just mental and physical. If you are a smart enough player you can get the advantage,” Harmon said. “If you are in the classroom, just because someone is 7-feet tall doesn’t mean they are going to get a better grade on a test than me.

“I know people who are 5-foot tall and get straight A’s and skip grades. Height doesn’t really mean as much to me, especially when I am on the court. I just play with my heart.”

After helping Bowling Green win the state title as an eighthgrader, he transferred to Adair and is averaging 32 points per game this season.

He attended UK’s Big Blue Madness in October and was impressed.

“They treated us so well. We (recruits) walked out, and I didn’t expect it, but everybody started clapping for us. I was walking behind Zion Williamson and Darius Garland and it was just great,” Harmon said. “I didn’t really want to smile. I was trying to act like I was just being cool, but inside there was a big smile because they were clapping for us. It was a great experience.”

This year’s SEC Tournament will be held in St. Louis for the first time and Frank Viverito, president of the St. Louis Sports Commission, knows Kentucky fans — and other SEC fans — are wondering what it will be like compared to Nashville, a tourney site UK fans have particularly liked.

However, there will be plenty for fans to do. Viverito says the top place for fans will be Ballpark Village — which is about halfway between the hotel and Scotttrade Center where the SEC Tournament will be played.

“It’s a gorgeous new facility across from Busch Stadium with a lot of entertainment options going on day and night throughout the tournament,” Viverito said. “SEC Fanfare will be on 14th Street next to the Scotttrade Center. Union Station has had a lot of renovation and fans will like it. Washington Avenue is only five or six blocks from the arena and is filled with shops, restaurants and clubs. There are phenomenal places to congregate and a lot of places to do things. You just have to walk out of the arena and look around a little bit.”

Viverito has been to last six SEC Tournaments, starting with the one in New Orleans in 2012. He’s never seen so much balance in the league and believes that should make for an exceptional tournament for fans of many teams.

“Scotttrade is a little bigger than Bridgestone Arena (in Nashville). It’s the home of the St. Louis Blues and is a comfortable and up-todate place to watch a basketball game,” Viverito said.

And he’s also heard from UK fans about what might be coming.

“They told me in Nashville last year that it would be St. Blue-is, not St. Louis, come SEC Tournament time,” Viverito said.

Quote of the Week: “It is very simple: accountability. He sees man-to-man that I can look to each individual and you are accountable for this guy and this area, where zone he doesn’t believe that,” UK assistant coach Tony Barbee on why coach John Calipari doesn’t like playing a zone defense.

Quote of the Week 3: “His head was 16 feet out of bounds. That is player safety issue. Mark Stoops did not say anything to the official. Neither did anybody else. I was right there (on the sideline) but yet UK got a penalty,” UK Radio Network football analyst Freddie Maggard on quarterback Stephen Johnson laying injured just out of bounds during the Music City Bowl when officials would not halt the game to protect him.