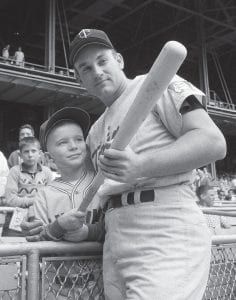 This Sept. 12, 1964 photo shows Minnesota Twins’ Harmon Killebrew posing with 9-year-old Johnny Guiney, at New Yorks Yankee Stadium. Killebrew had visited Guiney in May after he was hospitalized with critical burns suffered when his altar boy robes caught fire. Johnny asked his idol to hit a homer, and the leading home run hitter in the major leagues responded with a first inning, two-run blast. Killebrew, the Twins slugger known for his tape-measure home runs, died Tuesday at his home in Scottsdale, Ariz. He was 74. (AP Photo)

Harmon Killebrew, the affable, big-swinging Hall of Famer whose tape-measure home runs made him the cornerstone of the Minnesota Twins and perhaps the most popular player in the team’s 51-year history, died Tuesday after battling esophageal cancer. He was 74.

The Twins said Killebrew passed away peacefully at his home in Scottsdale, Ariz., with his wife, Nita, and their family at his side. He announced his diagnosis just six months ago, and last week Killebrew said he was settling in for the final days of his life after doctors deemed the “awful disease” incurable.

Killebrew is 11th on baseball’s all-time home run list after an exceptional 22-year career. His eight seasons with 40 or more homers still is tied for second in league history to Babe Ruth, and his uppercut swing formed the silhouette that inspired Major League Baseball’s official logo.

At Target Field, where the video board showed a picture of Killebrew, members of the Twins’ ground crew slowly lifted home plate and slipped under it a plastic encased, black- and- white photo of Killebrew winding up for a swing. The picture, believed to be from the 1960s, will stay beneath the plate the rest of the season.

Twins catcher Joe Mauer said he felt like he had lost a family member.

“He has treated me like one of his own,” Mauer said in a statement issued by the team. “It’s hard to put into words what Harmon has meant to me. He first welcomed me into the Twins family as an 18-year-old kid and has continued to influence my life in many ways. He is someone I will never forget and will always treasure the time we spent together.”

Former Twins pitcher Jack Morris, who grew up in Minnesota watching Killebrew play, was choked up and teary-eyed at a news conference to talk about the slugger’s death.

Former teammate Rod Carew, in a statement provided by the team, remembered Killebrew as a “gem” and for his class.

“I can never thank him enough for all I learned from him,” Carew said. “He was a consummate professional who treated everyone from the brashest of rookies to the groundskeepers to the ushers in the stadium with the utmost of respect. I would not be the person I am today if it weren’t for Harmon Killebrew. He was a Hall of Famer in every sense of the word.”

The Minnesota House observed a moment of silence at the state capitol. Rep. Bob Barrett of Shafer recalled how his father once did contracting work at Killebrew’s home and “couldn’t remember having met a nicer man.”

The 11-time All-Star was the American League’s Most Valuable Player in 1969 after hitting 49 home runs with 140 RBIs and 145 walks, all team records that stand to this day.

“I found out early in life that I could hit a baseball farther than most players and that’s what I tried to do,” Killebrew said.

Behind their soft-spoken slugger, nicknamed “The Killer,” the Twins reached the World Series for the first time in 1965 and back-toback AL Championship Series in 1969 and 1970.

Former Twins owner Calvin Griffith used to call Killebrew the backbone of the franchise. “He kept us in business,” Griffith said.

Killebrew was elected to the Hall of Fame in 1984, the first Twin to be enshrined. Killebrew’s No. 3 jersey was retired in 1975. Killebrew’s easygoing demeanor contrasted starkly with his nickname and standing as one of baseball’s most feared hitters.

“I didn’t have evil intentions,” Killebrew said on his website. “But I guess I did have power.”

Harmon Clayton Killebrew was born June 29, 1936, in the Idaho farm town of Payette. He was an all-state quarterback in high school, but it was his power with a baseball bat in his hands that got Killebrew noticed by Senators scout Ossie Bluege.

On Killebrew’s website, Bluege recounted how he signed the teenager to a $30,000 contract in 1953.

“I waited for the rain to stop in Payette, Idaho, and then he hit one a mile over the left field fence,” Bluege said. “I stepped it off the next morning and measured it at 435 feet. That convinced me.”

Killebrew didn’t just hit balls over the fence, he turned at-bats into longestdrive contests. He never worried much about his short game, preferring instead to swing for the fences, and wound up with a career .256 average.

“ I didn’t think much about batting average when I was playing,” Killebrew said.

On June 3, 1967, Killebrew belted the longest home run in Met Stadium history, a shot that reached the second deck of the bleachers in the old park, some 500 feet from home plate.

“He hit line drives that put the opposition in jeopardy,”

Bluege once said. “And I don’t mean the infielders. I mean the outfi elders.”

Killebrew finished his career with one season in Kansas City in 1975.

Commissioner Bud Selig said he was saddened by the death of a “true gentleman.”

“Harmon was as tough and feared a competitor on the field as the game has ever seen, while off the field he touched everyone he encountered with his sensitive and humble nature,” Selig said. “He led his life with modesty and dignity and I will miss him forever.”

Killebrew and Nita had nine children. In retirement, he became a successful businessman in insurance, financial planning and car sales. He also traveled the country with baseball memorabilia shows and returned to the Twin Cities regularly, delighting in conversations with fans and reunions with teammates.

With strong competition from Kirby Puckett in the generation that followed him, Killebrew will go down as perhaps the best-loved Twins player ever, possibly in all of Minnesota sports. Killebrew Root Beer is sold at Target Field, and there’s a Killebrew Drive next to the mall where Metropolitan Stadium once stood in suburban Bloomington.