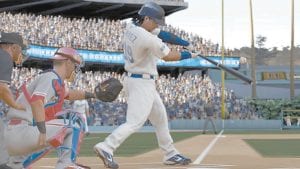 An animated image of Los Angeles Dodgers’ Manny Ramirez is shown swinging the bat in a scene from, “MLB 10: The Show.” (AP Photo/Sony)

The perfect game is one of baseball’s most elusive accomplishments. That means no hits, no walks, no errors — no opposing baserunners, period, over the course of nine innings — and it’s happened just 16 times in major league history.

2K Sports is off ering $1 million to the first person who can pitch a perfect game in its “Major League Baseball 2K10” (for the Xbox 360, PlayStation 3, $59.99). It’s a gimmick designed to attract fans who jeered last season’s entry in the long-running series, which had more errors than a Little League game.

“2K10” is far from perfect, but it’s a solid recovery: Let’s call it a quality start. Developer Visual Concepts, which reclaimed the franchise with last year’s model, has had some time to resolve the kinks. There are still some issues, such as sluggish baserunning and choppy player animations, but the sport’s core conflict — pitcher vs. batter — is satisfying.

2K’s “Total Control” mechanisms, which use an analog stick to mimic pitching and batting movements, still take some getting used to, but you can switch to “classic” button-pushing techniques. Either way, the results are more realistic: Patient hitters will draw more walks, and games are less likely to turn into homer-happy slugfests.

The major addition to “2K10” is “My Player,” which lets you simulate a player’s career from double-A ball to the majors. It’s not as well developed as Sony’s similar “Road to the Show” career mode, but it does move a bit faster and is just as addictive.

Speaking of Sony, it’s back on the diamond with “MLB 10: The Show” (for the PlayStation 3, $59.99). Developed by Sony’s San Diego studio, “The Show” is the gold standard for sports simulations. Its graphics are so dazzling that my girlfriend, who arrived as I was in the middle of a hardfought Mets-Braves clash, thought she was watching an actual major league broadcast.

This season’s edition doesn’t tinker too much with the already solid fundamentals: Pitching, batting, fielding and baserunning are all smooth and intuitive. That core dependability has allowed the designers to focus on details, such as giving pitchers a variety of pickoff moves. Every little detail — for example, umpire reviews of home run balls hit down the foul lines — adds to the uncanny realism.

The “Road to the Show” career mode is as robust as ever. The major addition is a full-fledged catcher simulation that lets you call every pitch. It’s so demanding that you’ll feel your knees creaking. Since the career mode only shows the plays directly involving your character, you can zip through it much more quickly if you park him out in right field.

“Road to the Show” isn’t ideal — I wish Sony could find a way to minimize the loading times between plays.

With “MLB 10,” Sony has pitched an almost-perfect game; I give it four stars out of four. “Major League Baseball 2K10” still has a way to go, but the franchise is heading in the right direction; it gets two-and-a-half stars.