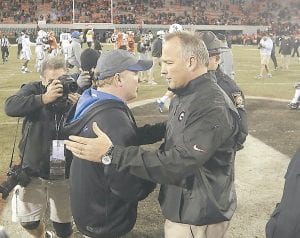 It’s been a long and disappointing — and now you can add the word embarrassing — inaugural season for first-year Kentucky football coach Mark Stoops and his regime.

In terms of its season record, UK now sits exactly where it did last year at this time under the embattled Joker Phillips at 2-9. Once again UK is fighting with our brothers on Rocky Top to keep out of the SEC East cellar.

Longtime SEC doormat Vanderbilt has jumped ahead of both UK and the University of Tennessee in the past two years, going a combined 4-0 against the Cats and Vols. Yes, I said Vanderbilt.

But this year’s “ basement brawl” is different in that both UK and UT are under new leadership and both expect to make great strides in the next few months before the 2014 season kicks off. Both UK and UT have lined up recruiting classes that would be each school’s best ever if the high school prospects sign in February. Both schools are also in the early stages of facility upgrades that are expected to make a big impression on recruits and season ticket holders alike.

UK is actually sinking more than $100 million into renovations that will completely change the game day experience for fans and the official recruiting visits for the perspective high school recruits. Kentucky athletic officials kicked this week off by having a few special friends of the football program attend a groundbreaking ceremony signifying the start of the renovations.

However, both programs know very well that nothing can put this awful season in the background faster create new enthusiasm for 2014 like a win this Saturday night at 7:00 in front of the ESPNU cameras. Obviously only one team can win, so either the Wildcats or Vols are headed into the offseason with a little bit of pep in their step. But make no mistake, both programs will have many problems left to correct no matter which team wins this Saturday in Lexington.

But I must remind everyone that Father Time can change things in college football, just as in life. Can anybody honestly tell me they predicted Vandy beating Georgia and Florida in the same year? Who among you predicted Florida would have a losing season capped off with a loss to Georgia Southern just months after seriously challenging for a BCS championship?

We just entered a new era of UK football four months ago, so give Coach Stoops a little more time. And a new quarterback wouldn’t hurt matters either.

Remember, Baylor is the team that ended UK Coach John Calipari’s new Rupp Arena winning streak last year at 52 in a row. But first thing’s first, and Cal has dug his heels in again and is trying to change some old high school and AAU habits that he believes are holding this team back from championship level play. It will take time, but that is something you don’t have in this day and age with the one-anddone era of NBA wannabes.

This week’s two games and some extra practice time (without the NCAA 20-hour rule) during the extended Thanksgiving break will offer some precious time to work with this team on these areas of concern. But this group better pick up quickly on Cal’s lectures during practice in the Joe Craft Center, because next week Providence and Baylor are just the type teams that can send this team into an early season tailspin before it ever gets to North Carolina and Louisville in mid- and late December.

Good news is that it seems the extra free throw shooting over at the Joe Craft Center since the Michigan State loss has paid off in recent games for the entire team, and it appears defensive conversion lapses have been rectified as well. Isn’t it amazing what a few extra wind sprints and some early morning 6 a.m. workouts can do for our youth in this day and age?

Coaching Carousel About to Begin

We all know it’s going to happen, but we just can’t predict when it will or where the greener pastures will be for each coach.

In some college football circles it is rumored that Strong won’t leave Louisville now that the Cardinals are just months away from entering the new and much more football-friendly ACC. But then again, if “Teddy Football” Bridgewater leaps to the NFL that might be the best time to exit River City for ole Charlie, because trading licks with the likes of Florida State, Clemson, Virginia Tech, Miami, Georgia Tech, and, oh yes, the “new Duke” might not be so appealing without a veteran and highly skilled quarterback.

Bobby Petrino had a little bump in the road at midseason down at Western Kentucky, losing back-toback games. It now appears he has the Hilltoppers back on course toward earning another minor bowl bid by the end of November. All those old ugly departures he had at a couple of his last stops? Well, that’s all in the past now and several tradition rich football schools need a new ray of hope and a bright offensive football mind to fill those empty seats and satisfy the thirst all those deep-pocketed donors have for winning.

Just think if ole Bobby just hadn’t taken that little motorcycle ride into the Arkansas back roads with his 22-year-old fling. The options he would have today at a Texas or a Florida would be mind-boggling. I’m still betting there is a big-time NCAA president and athletics director willing to take another chance on Bobby P having put his wild side behind him.

Vanderbilt head coach James Franklin, Alabama defensive coordinator Kirby Smart and many more will also take that leap of faith and tackle a new job. It’s going to happen down the road. We just don’t know how long that road is or where it leads to for each coach.