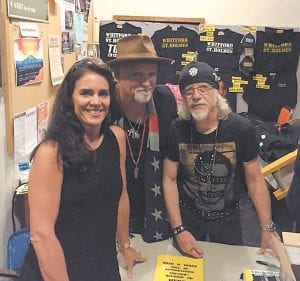 Patti Morris, left, met rock musicians Derek St. Holmes, left, and Brad Whitford, right, after the performance of Whitford/St. Holmes at Appalshop Theater in Whitesburg Sunday night. Readers of Larry Vaught’s weekly column in The Mountain Eagle may know Mrs. Morris, of Pineville, as the mother of University of Kentucky women’s basketball star Maci Morris. Guitarist Whitford is a founding member of the rock band Aerosmith, which broke onto the music scene in 1973. Vocalist St. Holmes was the lead singer for guitarist Ted Nugent’s band on Seventies’ classics such as “Stranglehold” and “Hey Baby.” Whitford/ St. Holmes performed both of those song’s during Sunday night’s show, as well as the Aerosmith classics “Last Child” and “Train Kept A Rolling.”