Basketball season is here, and so is jumper’s knee 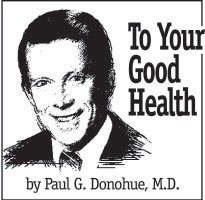 DEAR DR. DONOHUE: I play basketball — a lot. My right knee has started to hurt. It hurts the most when I start to play, and then it eases off. My coach and dad say it is jumper’s knee. My coach says to play through it. My dad says I should rest it. What do you say? — B.J.

ANSWER: Give me a break. What do you think I’m going to say? I side with your dad.

At the start of every basketball season, I get many letters asking about jumper’s knee. It’s a common malady of that sport, but it affects players in many other sports, like volleyball. The forces on the knees and the knee tendons when a jumper lands on the ground can be greater than nine times body weight. That’s a great deal of force.

Jumper’s knee is an inflammation of the tendon that runs from the bottom of the kneecap to the top of the lower leg bone. The inflammation comes from too much use with too little rest. It gradually builds up over two to three weeks before a player starts to complain. Early on, the knee hurts the most when a player starts to move around and gradually lessens as he or she continues to play. If you don’t let the inflammation quiet down, the pain will worsen and last longer. At its worst, it is present even when you’re sitting.

If you press on the area beneath the kneecap, you’ll find it is tender if you have jumper’s knee. A week or two of rest is all that’s needed in the early phases. Combining rest with Aleve, Advil or Motrin can speed the healing.

When you get back to playing, apply heat to the knee for 10 or 15 minutes before you start. After you play, ice it for the same amount of time.

I respect both your dad’s and your coach’s diagnostic abilities, but, if things don’t turn around shortly, I’d have a doctor examine your knee. Too many other things cause similar pain.

DEAR DR. DONOHUE: When you are obese and then lose weight, how does fat leave your body? Does it go through the digestive system? Does it pass through your gallbladder, liver or kidneys? I recently lost quite a bit of weight through hard work. I have had two attacks of digestive distress since I began to lose the weight and wonder if they were gallbladder attacks. My husband says the fat fairy puts weight on and takes it off. I was looking for a more scientific explanation. — M.B.

ANSWER: Fat is a fuel, just like the gasoline in your car’s gas tank. When we need energy to power physical movement, much of the energy for it comes from fat. Carbon dioxide is one byproduct of fat-energy burning, and we exhale that. Other byproducts leave in the urine. We also burn stored fat when we reduce our calorie intake.

Rapid weight loss can lead to gallstones and gallbladder attacks. How quickly did you lose the weight?

I like your husband’s explanation. It’s poetic and mystical.

letters, but he will incorporate

them in his column

whenever possible.
Readers may write him or
request an order form of
available health newsletters
at P.O. Box 536475, Orlando,